Maverick Vinales has won the German GP! We're talking about the race reserved for humans of course, as alien Marc Marquez ran a race of his own at the German track. Hats off to the Yamaha rider then, the Spaniard confirming his potential once more following his win of one week ago at Assen.

There is a greater satisfaction for Maverick though, as his second-place finish today puts him ahead of Valentino Rossi in the championship standings, 5 points ahead to be precise.

“Before the start, I decided to use the hard tyre – starts Maverick - lthe strategy was to stick behind Marquez and get rid of the chasing riders. Today the track was very different to yesterday and so scoring second in these conditions is very positive”.

“Marc has incredible grip at the rear at this track, I could see that right away. Totally different to Assen in fact, as there it was the Yamahas that did better in corner entry. Today I decided to ride smoothly and understand the tyres. This is the best result we could have hoped for”.

Second place repays the Yamaha rider for his efforts.

“I've worked hard with the team to improve my starts and the early stages of the race, and today I made a good start like at Assen and Montmelò. This step forward is what we were missing in order to be truly competitive and fight for podiums. We still need to improve though”.

He was the fastest Yamaha on a day that Quartararo ended up in the gravel.

“I didn't think I had to fight Crutchlow, as it looked like Quartararo's name on the pit board but then I read it properly and saw it was Cal's name. I thought he might take second from me, but in the end I had a little more”.

Despite second place, Maverick had one complaint today.

“We had great grip at Assen but today it was the exact opposite. When I closed the throttle, I couldn't enter the turns as I wanted to. We need to understand why, so that we know what to do in the next races. I'm happy as I said, as I know I got the best out of the Yamaha”.

The next round is at Brno, where Yamaha will bring its new bike to the August test.

“It will be interesting to see its potential, to understand where we are”.

Vinales is now ahead of Rossi in the standings, so will the team now follow him rather than #46.

“Yamaha works for two riders. Of course it's better to work in the same direction, and the feedback Vale and I provide is similar".

With the collaboration of Andrea Rossi – Audio recorded by Marco Caregnato 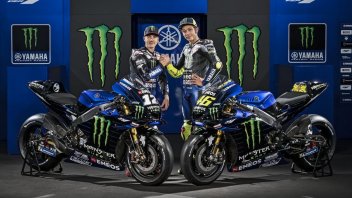 The beast unveiled: all the photos of Rossi and Vinales' 2019 Yamaha

Spaniard, Italian and New Zealander set for induction into the Hall of Fame in 2020 Jorge in Jerez, Maz at Mugello and Hugh later in the year
21 hours 56 min ago

Last week a member of the MotoGP family lost his life.Here are the details of his funeral and a link to a memorial fundraising page in honour of Gary
2 days 16 hours ago

The riders had complained about too many holes: new asphalt for Turns 1, 2, 9, and from 16 to 19, including the return straight.
3 days 20 hours ago