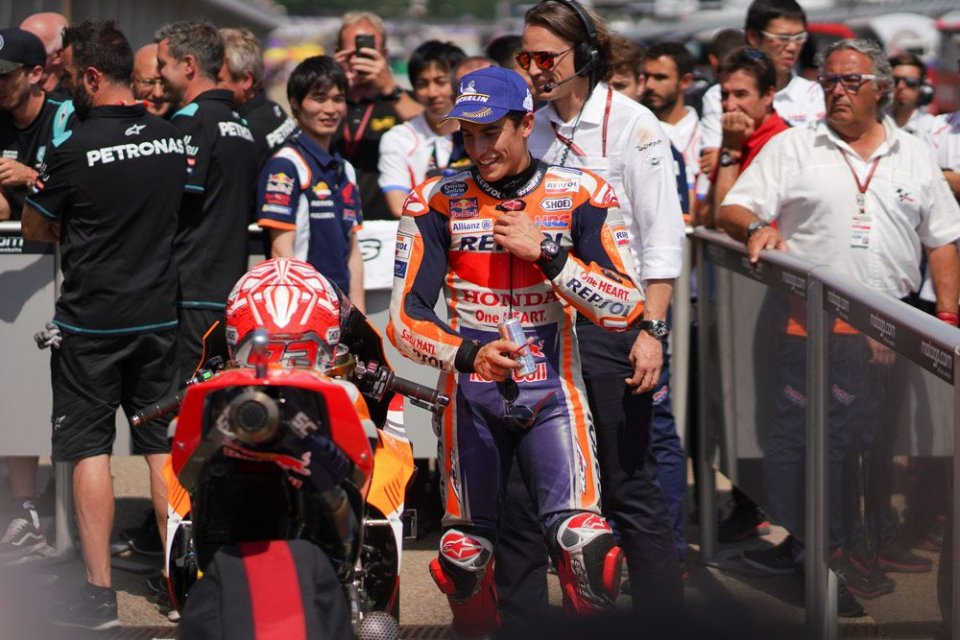 Mister 10 consecutive pole positions is not taking anything for granted. On paper he has nothing to worry about, considering his track record at the Sachsenring (unbeatable since 2010, when he was still racing in 125) ma he prefers not to lower his guard. He's keeping one eye firmly on the Yamahas and, in his own words, he's focused more on the championship than on a record number of wins.

“it's great to have scored my tenth pole in Germany but I'm focused on the overall weekend. Tomorrow I have another race in which I can increase my advantage over the Ducati, that appear to be suffering”.

So you're not even thinking about your tenth Sachsenring win?
“I'm not thinking about that, but the championship. It all depends how I feel tomorrow but if I'm lacking confidence it's more important to score points than a win”.

Are you surprised not to see the Ducatis out front?
“It's good news for me, Dovizioso will start further back and that's better for me”.

You didn't hold back in qualifying today….
“The Yamahas put pressure on me but I felt good right from my first exit. I made a few mistakes on my second exit and then on the third I had even worse sensations, with the last tyre, but I was faster”.

Who worries out for the race?
“The two Yamahas are in great shape, Rins too. The most dangerous is Vinales”.

Will you try to break away?
“That will depend on the conditions we find. I expect a race of two parts - after the first 15 laps the bike could behave in a totally different way”.

Will you use the new frame?
“I tested it at Barcelona and have done so again here. It has goid potential, I might be quicker with that one, but it also has weak points that could lead to a crash. In the end it's a question of safety. I know the old frame well and how it reacts in the race so I'll use that one in tomorrow's race. Considering my position in the championship I won't take any risks, though I might be faster with the new frame, we need more testing time”.

Changing the subject, did you watch the first E-Pole?
“Yes, but I don't like the format, the same as the old SBK Superpole. But the MotoE bikes surprised me, they really get that front wheel off the ground”.