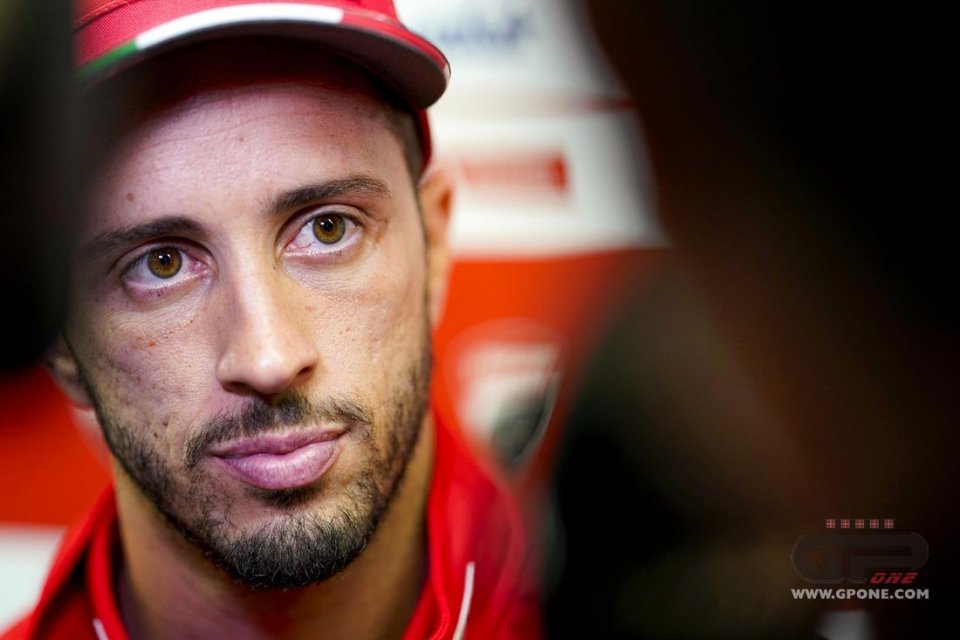 Andrea Dovizioso arrives at the Sachsenring with one certainty and several doubts. The first makes him happy, as he knows Petrucci will flank him again in 2020, the second can only worry him, as the Ducati and the German track have never really got on.

And a quick look at the standings reminds us that Marquez lies 44 points ahead of Dovi.

“It's a big gap, but that's not the point - muses Dovizioso - I'm the first to realise how hard it will be to close the gap to Marquez and the main goal here is to stop him from increasing his lead by too much. The point is that Marc is proving to be the fastest and this would be a problem even if we had the same points tally. To get close to him, we need to be quicker, when we're competitive everything can change. Now we need to understand how to do that and what our margin for improvement is”.

There are those who say Dovizioso isn't taking enough risks. He has this to say:

“I know many think I wasn't aggressive enough at Assen, but that's not the case. You don't become faster by being aggressive. I pushed to the max for a few laps, to stick with the leader, but I simply didn't have the pace. I know I have a clean style but I started from 11th and was up to 6th by the end of lap one, so I'd say I was quite aggressive. There was no point insisting, when you're not quick enough you only risk making a mistake”.

So he simply needs to be quicker at the Sachsenring, perhaps the most difficult track for the Ducati on paper.

“Our problems will be evident here. But last year I wasn't far from the podium so fighting for that isn't impossible I'd say. I know this is a track where I've always struggled, but I'm determined to improve. Also in terms of race management, because it's important ride smoothly here and not waste energy. I didn't manage it last year and paid for it come the end of the race”.

Lastly, the good news, or rather the fact that he will continue to share the garage with Petrucci again next year.

“I'm pleased but not surprised about his renewal. Danilo has done what he needed to do, taking a step compared to last year, and I don't mean speed, which he already had, but race weekend management. This is why he has so many points. I'm pleased for him and that we can continue to collaborate”.

The two have already spoken face to face.

“We were out for dinner together with friends last night and chatted, as you do. It was important for Danilo to continue with Ducati and he's the rider that most deserves it, he's surprised many. There's never been tension between us, he was stressed at Assen because the situation was tense and we couldn't be pleased with the race result. His frustration wasn't directed at me”.

Their close friendship is unique, even more so considering their close positions in the standings. But Dovi isn't worried.

“Danilo and I will continue to behave as we always have. We'll work together at home and over the race weekend, because it's a productive method for both of us. In the race, the only rule is not to get into fights that waste time. The guy who has more moves ahead, there are no team orders, it's just intelligent reasoning that allows us to bring home as much as we can”.

VIDEO - The flames spread during a day of free practice, no harm to people or structures
6 days 12 hours ago

The reigning champion wins race 1 but ends up on the ground in race 2, giving the Suzuki rider his first career success. A 4th and 7th place with a...
6 days 18 hours ago

A non-stop week for the Ducati rider, beginning with the Misano tests, then a bike ride to Tavullia, and today on the Dorno track
1 week 13 hours ago