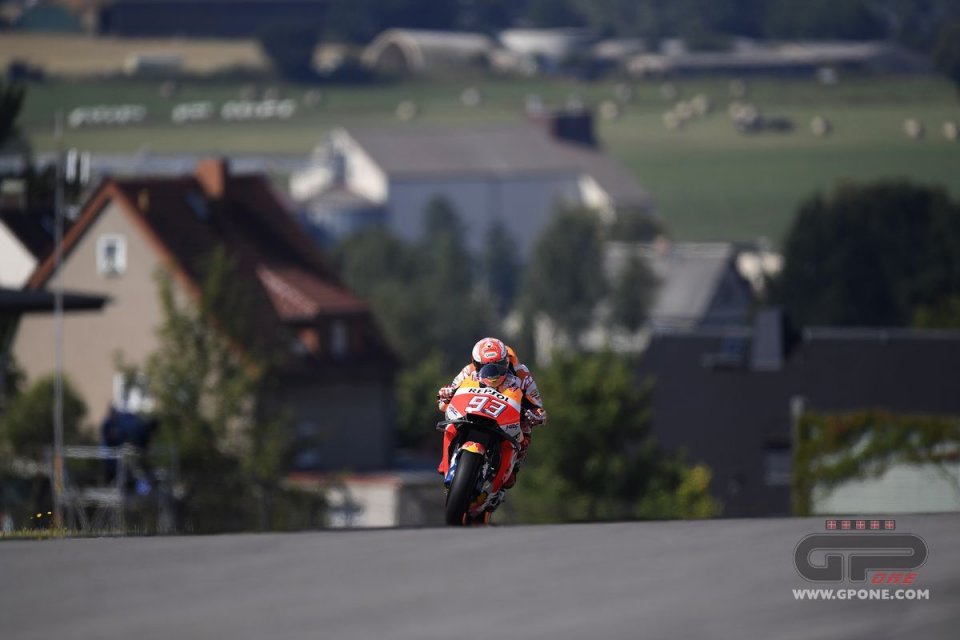 =  The 2019 German Grand Prix at the Sachsenring will be the 81st Grand Prix event to be held on German soil – the 22nd successive year at the new Sachsenring circuit.

= The first motorcycle Grand Prix to be held in Germany was the West German Grand Prix held at the Solitude circuit in 1952, when it was reported that 400,000 spectators turned up to watch. Reg Armstrong won the 350cc and 500cc races riding a Norton while home riders Rudi Felgenheier won the 250cc race on a DKW and Werner Haas won the 125cc race on an NSU.

= The West German Grand Prix was held every year from 1952 through to 1990, when East and West joined to become a unified Germany. Four different circuits were used during this period 1952 to 1990: Solitude, Schotten, the Nurburgring and Hockenheim.

= There has been a German Grand Prix held every year since unification; from 1991 to 1994 at the Hockenheim circuit followed by three years at the Nürburgring.Since 1998 it has been held at the new Sachsenring circuit.

= In addition to those mentioned above, one other Grand Prix event has been held in Germany: the Baden-Wurtemberg GP held in 1986 at the Hockenheim circuit for just the 80cc and 125cc classes.

= The newly built Sachsenring circuit was initially just 3.508 km long with one short section of track from the old road circuit. Major modifications to the circuit in 2001 and then additional slight alterations in 2003 resulted in the current 3.671 km track layout.

= The Sachsenring is one of just five circuits on the current Grand Prix calendar that run in an anti-clockwise direction, along with Austin, Aragon, Phillip Island and Valencia.

= The best result for a German rider in the premier class at the Sachsenring since racing returned to the circuit in 1998 is the second place for Jonas Folger in 2017.

= Yamaha has had four wins in the premier class since 1998 at the Sachsenring circuit, with two different riders: Valentino Rossi and Max Biaggi.

= The only win for a Suzuki rider at the Sachsenring circuit was in the 500cc race in 1999 with Kenny Roberts Jr. The best result for Suzuki in the MotoGP class since 2002 at this track is when Chris Vermeulen crossed the line in third back in 2008.

= The best result for an Aprilia rider in MotoGP since 2002 is a seventh-place finish with Aleix Espargaro back in 2017.

= Last year, Bradley Smith was the only KTM rider across the line at the Sachsenring, in 10th place, which is the best result for the Austrian manufacturer at this track in the premier class.

= Honda riders have also qualified on pole for the German GP for the last eight years; the last non-Honda rider to start from pole for a MotoGP race at the Sachsenring was Jorge Lorenzo in 2010 on a Yamaha.

= Marc Marquez is the most successful at the new Sachsenring circuit with a total of nine wins over the last nine years, six in MotoGP, two in Moto2 and one in 125cc. His closest rival is Dani Pedrosa with six wins (2x 250cc, 4 x MotoGP).

= The only rider who has more than a single Moto2 win at this circuit is Marc Marquez, who won in both 2011 and 2012 from pole position.

= The seven Moto3 races that have taken place at the Sachsen-ing have been won by seven different riders: Sandro Cortese, Alex Rins, Jack Miller, Danny Kent, Khairul Idham Pawi, Joan Mir and Jorge Martin. Only two of them have not been won from pole position: Khairul Idham Pawi (2016) and Joan Mir (2017).

The Scottish rider is currently involved in the British SBK championship, in the past he has raced in the Rookies and Talent Cups and will make his...
6 days 23 hours ago

The Soft tyre in the front provides riders with a very good feeling and also a strong grip on maximum angle. The Medium front tyre could also be a...
1 week 14 hours ago

At the exit of Turn 5, Miller was observed to be riding slow on line, disturbing rider #12 and causing a safety concern. Same punishment for Baltus...
1 week 15 hours ago