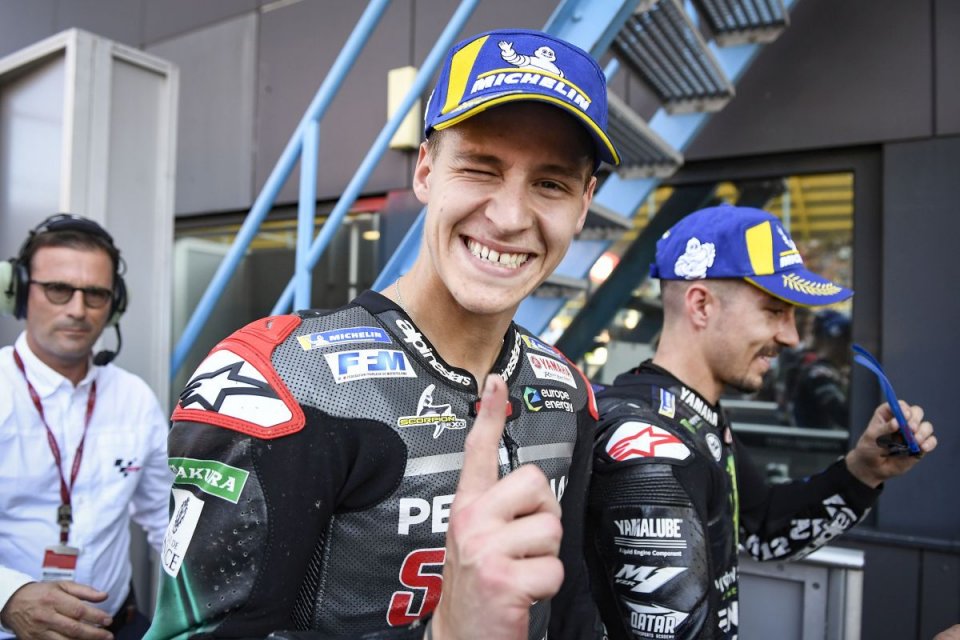 There were two Yamaha on the Assen podium. The first one was Maverick Vinales', the other Fabio Quartararo's, the star of a race made up of intelligence and perseverance. Hats off to the performance of the French rider who reaffirmed his potential in the Netherlands.

"It was a really great race " began Quartaro. "Among other things, I was even able to take the lead in the first few laps. It's something unparalleled for me, since I used to see these champions in action as a child and dreamed of being like them. I'm obviously satisfied with the podium, even though I was already struggling with my arm in the middle of the race, and the wind certainly didn't help things. But I bit the bullet to keep myself attached to the group of the best."

You dueled it out with Maverick and Marc, but then you were forced to give up.

"I gave it my all in the beginning, since I wanted to be attached to the leading group. We were just a few riders, so it was easier to control the situation as compared to other races. That was my strategy, but unfortunately I struggled. My pace in Barcelona was better and, on that occasion, four riders ended up falling. But what matters is being able to get back on the podium."

How much did the problem with your arm influence everything?

"Maybe I wouldn't have brought home the victory like Maverick, but I could have been faster. Certainly, this result gives me more confidence. Like I said, too bad I had no strength in my arm. I would have taken the podium home anyway, but maybe I would have been able to duel it out with Vinales and Marquez."

That's true. The fact is that on the outside, there's less speed wobble, and the bike was more stable. That's why I was trying to avoid the internal trajectory with the wind that was complicating things further. But I only figured this out in the final. We tried to find solutions during the weekend. However, it's fine how it is, since all this will serve as an experience for me to improve in view of the next races."

You'll be in Germany in a week.

"The next GP is at the Sachsenring. Getting back on the track after only seven days will be useful, and the fact that the track has so many left-hand turns, I consider it a positive aspect from a physical point-of-view. Like I said, I'm happy, given that I'm continuously learning at every round, and I gain more confidence with my bike. Unfortunately, my arm is not 100% at it's best yet, but I'll bite the bullet. Personally, I'm confident because we started at the beginning of the season with the top ten as our goal, then it was the top six, and now we're on the podium."

This podium is leading you even more towards the title of rookie of the year.

"The goal of the season is undoubtedly that. I think we're following the right direction, and the feelings are good, even if the road ahead is still long."