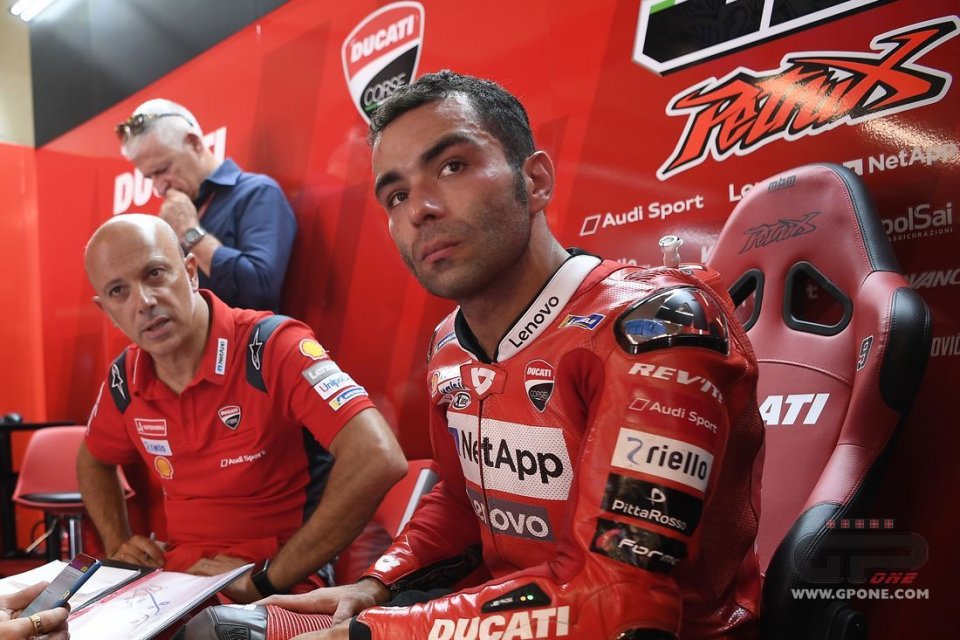 "I'm between a rock and a hard place," is how Danilo Petrucci described his situation. After the Assen race, his smile from the last Grand Prixs has disappeared, and his face is like a wax mask. It's not only the race result that worries him (6th and almost 15 seconds from the winner), but his contract situation. Ducati is keeping him on his toes, making him toil for his renewal.

Under these conditions, Danilo cannot be calm. In Holland, more than of his position, he seemed to thinking of Dovizioso. "It's difficult to battle it out against a teammate," he reflected.

What do you mean?
"It's a complicated challenge because I have to be particularly careful with him. He's second in the championship. I can't risk too much to overtake him. In fact, on the last lap, so as not to attack, I didn't cover myself and Morbidelli passed me."

He's 2nd in the championship, but you're 3rd. Isn't that enough to reach for the top?

"Right now, I'm in a strange position because no one expected certain results from me. I've always been aware of my potential, even when I was last with Ioda. I had never been so fast because I had never been in an official team."

Wouldn't it be better to think only for yourself?

"That's a difficult question to answer. There's no strategy in the squad so far. They just told me not to take risks to overtake him. The goal is to win the World Championship with Dovizioso."

Everything's related to renewing your contract?

"I'm in a difficult situation to manage, between a rock and a hard place. It's not favorable for me to go into too much detail about the terms of my renewal."

Would it not be better to clarify things as soon as possible?

"That's what I said as soon as I got off the bike. I'd like us to meet to define everything for the next races."

"Like I said, I can't be too specific. We don't agree on the numbers and, to get the ones I want, I have to get certain results."

Following this logic, things could take a long time...

"What can I say? We'll see when we'll be able to close the deal."

"It was a strange weekend and a very complicated Sunday. In the early rounds, I was among the fastest. On Saturday morning, I had even ridden under the track record. Then the temperatures went up, and riding the bike became very difficult. Today, I managed to keep a good pace in the middle of the race, but the last 10 laps were a nightmare. The positive side is being 3rd in the championship, but I was too far from the first in the race. There are not many reasons to smile."

Were the problems caused by the lack of grip on the track?

"The conditions were the same for everyone, but when it happens, we lose traction, and we're not able to be fast. Having gotten 14 seconds means having been very, very far from the best."

The Ducati that suffers the heat seems to be something new...

"The strange thing is that temperatures rose in the middle of the weekend. When you arrive in Sepang, you expect it to be hot and you prepare for it. Unfortunately, due to the understeer, we suffer these conditions. We're not able to bring speed into the corner, and the result is that we get a second per lap."

The opposite of the Suzuki, which you battled it out against.

"They'll lengthen the lap a mile with the trajectories they do, but they're fast. I battled it out with Mir. Logically, he still lacks experience, but when he'll acquire it, he'll become a big problem. The Suzukis are able to use the entire track. If we try to enter the corner wide, we don't reach the apex, so we have to tighten. It's difficult to battle it out against them on tracks where there are no long straights and low gear accelerations".