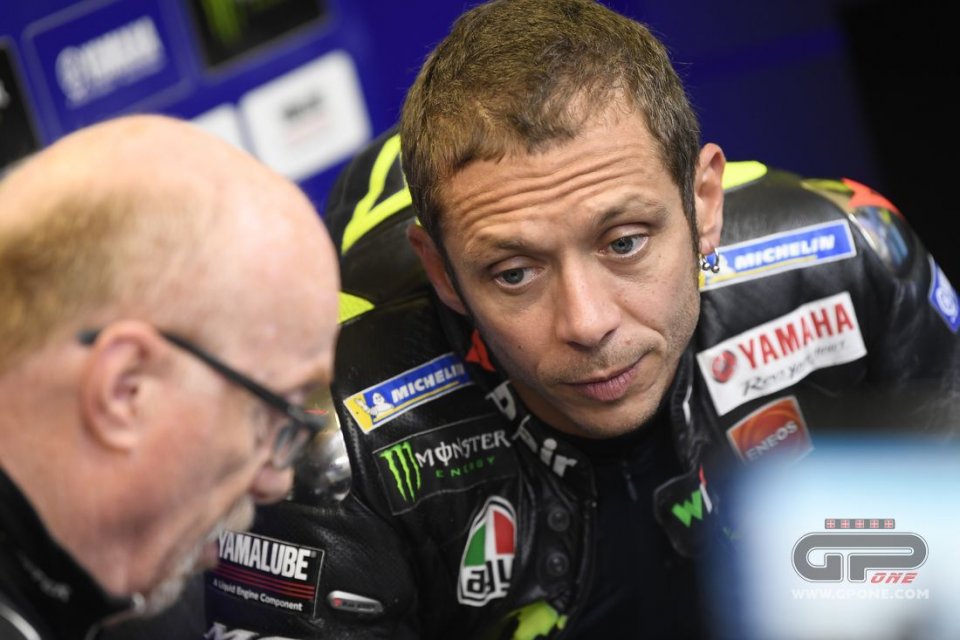 Valentino knows what it means to swim upstream when, with every stroke, the shore seems further away. He went through it with Ducati and, recently, also with Yamaha, so he understands what his former teammate, Lorenzo, is going through.

"At the moment, it seems as if he's having a big problem with the front." Rossi tries to give an explanation. "In fact, he always falls the same way, and he's one of those riders who really doesn't like falling. He's in a difficult situation. When you fall every time you try to push, you always lose a little confidence, which is what you need to get out of it. I don't know if it's bad luck. In Barcelona, he was going strong, but he made a mistake. I think it's a technical problem."

How do you deal with this situation on a mental level?

"It's difficult because trusting the front is the most important thing for a rider. To go strong, you have to trust your bike. Falling when you're trying to push is something difficult to deal with psychologically. Like I said before, you end up losing confidence and move away from the solution.

How do you react in these cases?

"Lorenzo is a very strong rider, a 5-time world champion. His speed is out of the question. He must stop for a moment and reason and understand what's happening."

About your day. How do you judge a 9th place here in Assen?

"In the end, I managed to stay in the top 10 but, in the morning, I had an electrical problem (ed. with a speed sensor) on the bike with the best set-up, the one I wanted to use. It took me a while to figure out what the problem was, and this made me lose time, at least 15 minutes, so I was always late."

In the afternoon, however, things improved...
"Yes, but I'm not very happy anyway. On the flying lap, I didn't do badly, but my pace is not fantastic. "It's far from that of the first 5."

Where do you suffer?
"In the fastest parts of the circuit. I can't get into a strong corner as I'd like to. I'm not at ease on the bike. Its a setting problem. We have to work on that."

You also experimented with the two fairings. What was the result?
"Here, in Assen, wheeling is a problem, The latest version of the wings help but, on the other hand, they make the bike a bit more difficult to ride and, in the end, I prefer the standard fairing. There are fast portions on this track where you need to have confidence and good vibes to be able to push harder."

What could you do tomorrow?
"First of all, try to get into the Q2 directly, even if I know it won't be easy. Then we'll have to clarify the ideas on the choice of tires, which is very open. The most important thing, however, will be fixing the set-up."