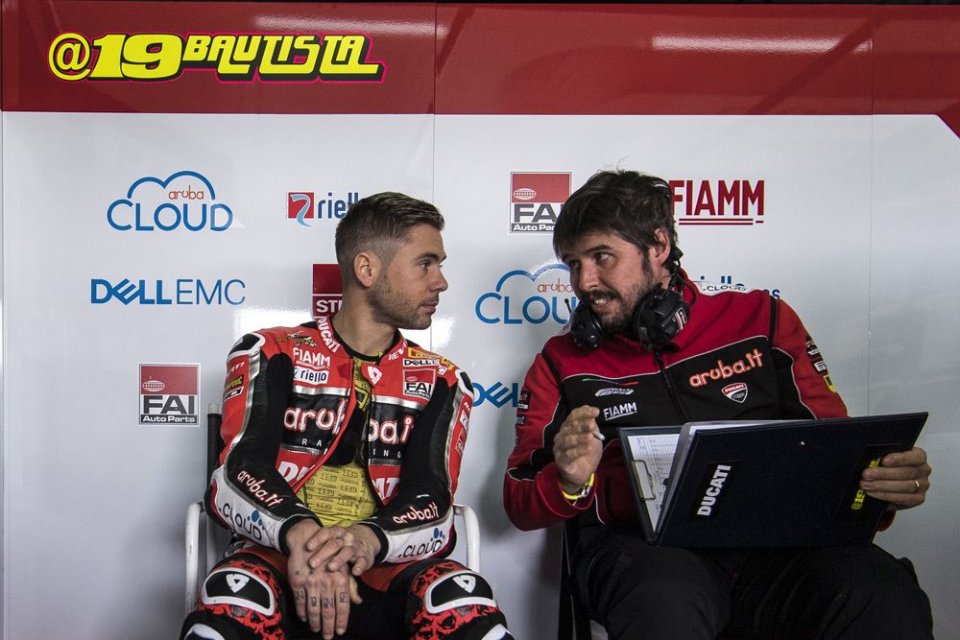 His rivals at Misano hoped to have found Alvaro Bautista's weak spot yesterday: wet conditions. Not really though, as in his first wet SBK race he still reached the podium with the Ducati Panigale V4R, effectively carrying out damage control and conceding only a handful of points to Rea. It's also true that a few crashes helped but in certain cases, it's better not to take risks.

His crew chief Giulio Nava is nevertheless pleased with the result and thinks that Alvaro simply needs time to show his full potential in the wet.

“It's not really a case of being strong or weak in the wet, but a matter of getting used to it. Alvaro had already tested the Pirelli rain tyres, but only during testing or practices, and every time you go out in the wet conditions are different. This was his first race on these tyres, with this bike and with steel brakes”.

So overall, he did a good job?
“Coming from MotoGP, he doesn't have the necessary experience with these tyres to understand their consumption and how to conserve them. Also, the track conditions were complicated, as the rain was intermittent and when you follow a rider, your visibility is poor. He was faster at the end than at the start in fact”.

Could he have aimed for more?
“I think it was a combination of a lack of experience and the fact he was also thinking about the championship, especially after the Jerez crash. It's better to finish the race and score points, considering the situation”.

He struggled in the wet but is the Ducati benchmark in the dry. What is the secret of his Panigale?
“He wants an agile bike that he can turn easily and that allows him to be fast through the corners, a little like a 250. The first time he rode the Panigale V4R, he actually told me that it was like being aboard his old 250".

Why is he the only rider able to interpret this bike?
“I think talent makes the difference, but there are also skills that are developed over time. Racing in MotoGP, at the current level, riding very complex bikes, in terms of the adjustments and electronics, at very different tracks, all this gives you a wealth of information and knowledge that you can tap into, even unconsciously. Perhaps for other riders, who've been here longer, it was a big change to go from the V2 to the V4, while Alvaro faced a blank page and started to write on it with no preconceptions. I don't know, we just focus on our side of the garage”.

You've worked with many champions, including Stoner and Marquez, what type of rider is Bautista?
“Alvaro is a very strong rider, one of the best with whom I've had the pleasure of working. The only thing I could say is that at time he perhaps isn't selfish enough, something he sometimes pays for".

Do you think he wants to stay in SBK or is aiming to return to MotoGP?
“I think Alvaro is happy to be here because he's found a good atmosphere in Ducati and cannot complain from a technical standpoint. We are listened to and they try to satisfy our every request. But it's only normal that a sportsperson doesn't want to settle, that's part of the mindset of a fast rider”.