When Chaz Davies let Alvaro pass, it was easy to think of a team order, but the truth was quite different. The Welsh rider would have liked to get on the podium at Misano, but an electrical problem on his Ducati made the decision for him.

"I had an electrical problem in the downshifting system." He explained the reason for his slowing down in the last laps. "I couldn't downshift with the gears, and I struggled a lot in the last part of the track, like in the first and at Turn 4. I continued changing gears without the electronics, closing the throttle.

It's not the first time that Chaz's Panigale has acted up. It had already happened to him in Thailand and in Imola. However, Davies doesn't want to point the finger at anyone. "It's just bad luck."

He still feels bad not getting on the podium. So close before that inconvenience.

"Maybe it would have been within my reach, I don't know what I could have done. I had a good pace in the first part of the race, but that's how it goes,” he ended philosophically.

However, the day also had some positive aspects because the Ducati  passed the test in its first race under the rain.

"I'm very happy with how the Panigale V4 performs in wet, conditions, even though I know we can still improve it," he said. "Considering that this is the first race we had under the rain with this bike, I was quite competitive and felt good on it, besides that problem, but these are things that happen."

The beauty of the SBK is that Davies will have the opportunity, or rather two, to make up for it. And the weather forecasts are better than today.

"I don't know what will really happen tomorrow," the Ducati rider admitted. "The last tests were useful. It was better here than in Jerez. I think I can be competitive even in dry conditions, even if I don't have a clear idea about the race distance. Pirelli brought many rear tires and, on Friday, we didn't have time to try them in many laps. We'll have to see how the bike will behave in the last part of the race. It could change a lot." 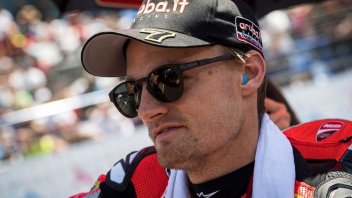 No Ducati for Dovizioso at Misano, a test with the Audi RS5
MotoGP
Moto2
Moto3
Sbk
MotoE
MotoAmerica

VIDEO. The Japanese team's rider missed the last three GPs of 2019 to solve his physical problems and get to the Sepang tests in the best of shape.
4 hours 6 min ago

Spaniard, Italian and New Zealander set for induction into the Hall of Fame in 2020 Jorge in Jerez, Maz at Mugello and Hugh later in the year
5 days 4 hours ago

Last week a member of the MotoGP family lost his life.Here are the details of his funeral and a link to a memorial fundraising page in honour of Gary
6 days 23 hours ago

The 11th WDW dates are: 17, 18 and 19 July, and as a tradition, it will be at the "Misano World Circuit Marco Simoncelli", Misano Adriatico
1 week 6 days ago

The first time that the new Michelin Power Slick rear tyre was tested in the field was in the Barcelona test in June. The new tyre is characterized by a construction aimed at increasing performance and stability
1 week 6 days ago