The Superbike circus has landed in Misano, without a doubt, Ducati's turf, and Chaz Davies wants to honor it. The first day in Romagna for the Welshman was difficult, but not that much. The eighth place in the combined ranking is not an excellent result, but not too bad either, and that leaves hope for improving tomorrow.

"It was a positive first day," started Chaz, "although the position is not great. Given that the sensations I perceived are not bad, I have a lot of room for improvement."

To make the task more difficult for all the riders was the very slippery asphalt to which was added a problem with a tire during FP2 for Chaz. So there was more than one obstacle for n.7, who still managed to show a smile.

"The track was slippery today, so I think it was difficult for everyone to reach good times. In the first part of the afternoon round, I also believe I had a flawed tire. I stopped to change it," he said, "and the sensations were immediately much better."

Now everyone's thoughts are aimed at tomorrow, where there is little time to work before starting to get serious. In fact, only the FP3 will allow the Welshman to work on his bike, before opening the dances with the Superpole.

"We don't have much time tomorrow to do what I want, but we're working hard on the set-up to get it right, and we'll continue to do so." 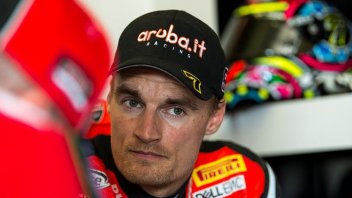 The Californian Yamaha rider took the flag alone ahead of teammate Gagne and Herrin, who beat the Ducati rider in a photo finish. Elias crashed out...
12 hours 30 min ago

Defending champion wins ahead of Scholtz and Gagne. 5th and 7th, Wyman's and Jacobsen's two best Ducatis. Elias stopped by a problem.
1 day 4 hours ago

The reigning champion started has started 2020 in the best possible way, heading his teammate Jake Gagne. Race 1 at 22:00 on Eurosport
2 days 2 hours ago

In a video on You Tube, the driver defended his reasons but confirms the end of his experience with Audi in the Formula E
5 days 11 hours ago

It was decided by the Board of Directors via video conference call. Previously the FIM-Dorna contract provided for a minimum of 13 Grand Prix. In F.1...
1 week 5 hours ago

An embarrassing moment for Audi Formula E driver Daniel Abt who, during the virtual race in Berlin, had an eSports professional race in his place:...
1 week 23 hours ago