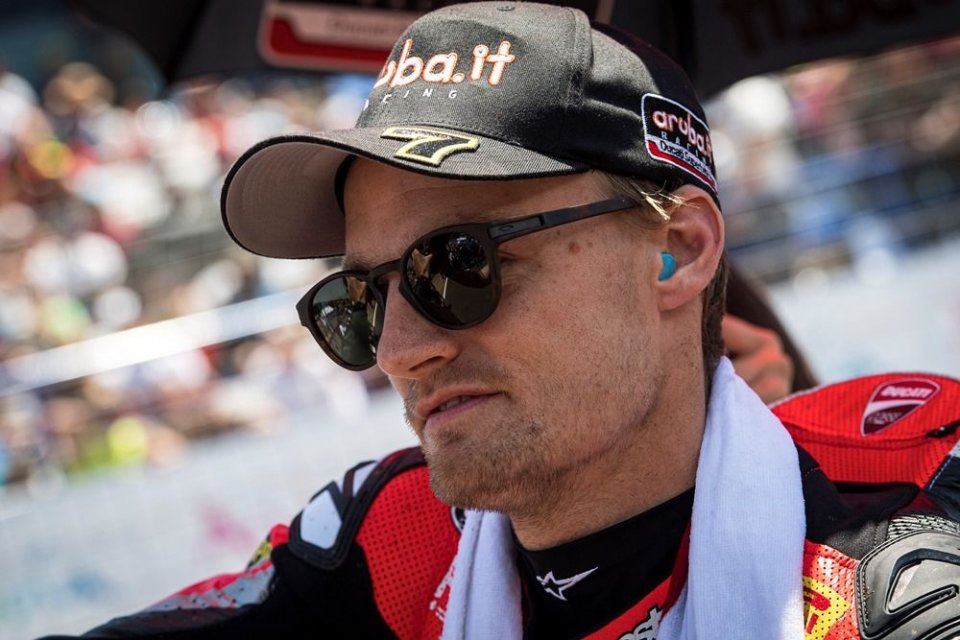 Chaz Davies and the Ducati V4, a relationship with highs and lows that, at the moment, has not yet taken off. If Bautista's new bike seems tailored-made, the Welshman is instead still seeking the right path. It seemed as if he had found it at Imola, but he then took an abrupt step backwards in Jerez. Now with the World Championship at Misano, the Aruba rider is looking for redemption and, once again, he'd like to savor that confidence he found a month ago at the Santerno.

"Unfortunately, I'm not 100% in shape for this race after the accident in Jerez, but we're here, and I don't want to think much about my physical conditions any more," said Chaz. "I'm confident because I don't think I'll struggle that much. I suffered in the last race, but I was then able to be competitive Sunday, finding the confidence I needed. We did a test three weeks ago here in Misano, but the conditions were different, so we'll have to evaluate things."

Chaz, let's get back to the last round. What changed from Saturday to Sunday?

"On that occasion, the balance of the bike was drastically changed, and that gave me the confidence I needed to face Race 2. Too bad that it ended in a different way from what the expectations were."

Everyone wonders why Davies struggled so much going from the old to the new bike?

"The Panigale V4 is a bike that has nothing to do with the V2. When you change from one bike to another, you're never sure if you'll adapt quickly. Just look at the MotoGP, where Lorenzo is struggling with the Honda, or Zarco with the KTM. The fact is that, in SBK, there are no major changes and, in some way, the thing is not so obvious."

What has given you the most trouble with the new bike?

"The frame. At the moment, I have not yet found the right balance with the bike in corners. In fact, I can't seem to be natural in my style and competitive, as I'd like. I still lack the necessary smoothness. However, as we all know, the perfect bike does not exist. I can't deny that I'm struggling but, in 2014, the situation was not that different with the V2."

"Absolutely! Following Bautista's style is certainly not the solution, given that each rider has his own. Maybe you can adapt or reinvent yourself, but reproposing another driver's style is impossible. If that were the case, everyone would control their bike like Marquez does, avoiding falls."

What will you ask Ducati for next season?

"No revolution. First of all, I'm not a rider who wants drastic changes. In fact, I realized that the Ducati V4 is like a puzzle. You have to try, but in the end, you find the piece that fits, like what happened in Jerez. It takes patience, but this is basically a new bike that has to be discovered, step by step. The most important thing that makes me confident is that the V4 has great potential. If it didn't, it would be a serious problem. This is worth more than the final result you achieve."

What was the most complicated moment with the 2019 bikes?

"Race 1 in Imola, without a doubt. That was a day to forget."

What did you think the first time you rode the V4?

"That we have a racing bike."

Chaz, were you able to speak with Melandri after what happened in Jerez?

"No, we haven't spoken. I knew right off that he was convinced of his own point-of-view. If everything is black for him, it's useless to make him understand that things are white. The truth is that his was not a normal attempt to overtake. He wants revenge against me for his past in Ducati, but that's how Marco is."

In the end, they penalized him.

"I think that penalty was absolutely necessary, even if it could have been more stern. I believe it's an important demonstration on behalf of  the Commissioners."

The Dutch team (which was supposed to run with Tom Toparis and Gianluca Sconza) has postponed its debut in the World Cup due to the financial...
1 hour 11 min ago

Among the other teams, Webike SRC Kawasaki France Trickstar (EWC champions) and Moto Ain (Superstock champions) will use the French tyres
2 days 17 hours ago

He tells of the horrendous crash in which he nearly lost his life and recounts tales of gangsters, glamour models and glory in one of the most...
3 days 2 hours ago