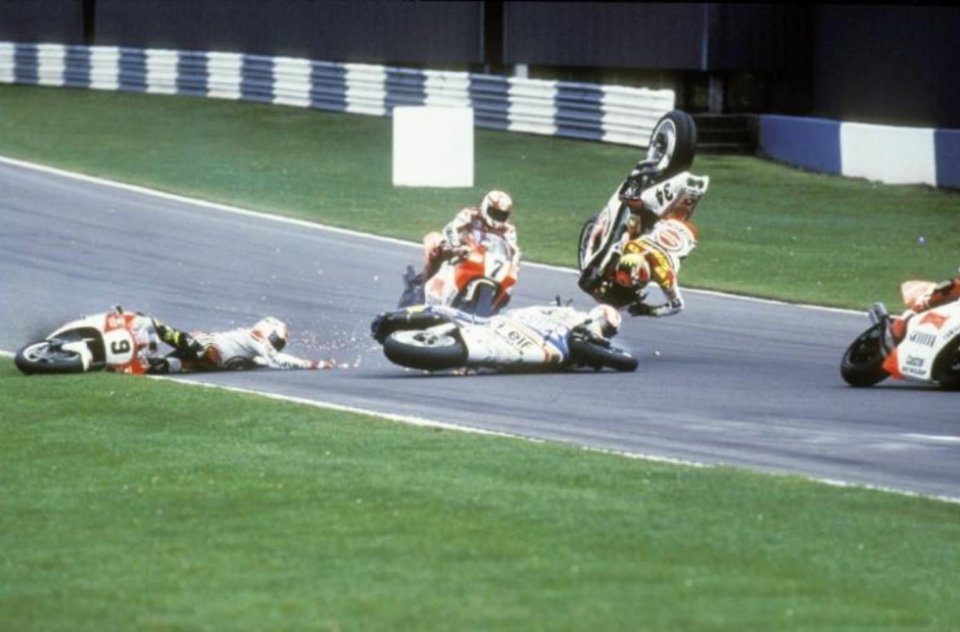 Just a few more lines on the Barcelona strike out.
There was more talk of Jorge Lorenzo's lap two incident than there was about the entire race at Montmelò.
That's only normal, you say, considering it involved four of the championship's stars - in the shape of Jorge himself, Dovizioso, Vinales and Rossi- and was caused by a world champion.

But those of you who recall more than a few Grand Prix will know that this wasn't the first time, and unfortunately won't be the last time that a race is decided just a few laps in.
Certain judgments have perhaps been unfair in our opinion.

Sure, people speak in the heat of the moment and, in the case of the managers in the garages, aware of the points lost. Fair enough.
In this case though, the many similar incidents that have occurred in the past should have resulted in more cautious statements.

Consider the strike out caused by Mick Doohan at Donington during the opening laps of the 500 race in 1993: Mick knocked down Kevin Schwantz who in turn involved Alex Barros. Luca Cadalora won ahead of Wayne Rainey.
Schwantz injured his wrist and, if it hadn't been for Rainey's unfortunate incident at Misano, he'd probably have waved goodbye to the title. It was said that Mick, having started to use the thumb-activated rear brake following the serious incident of Assen the previous year, had not yet perfected his use of it.

And still on the subject of titles in jeopardy due to a strike out, how about the 2006 Barcelona GP? The two Ducati riders, Sete Gibernau and Loris Capirossi, collided and also involved Marco Melandri and Daniel Pedrosa. There was a restart, but the two Ducatisti were ruled out. we could say that Capirex, that year, lost the chance to fight for the title, going on to finish third behind Nicky Hayden and Valentino Rossi, but only 23 points back.

A few years later, at Valencia, in 2011. A turn one incident caused by Álvaro Bautista ruled Randy De Puniet, Valentino Rossi and Nicky Hayden out of the race.

So, there's nothing new to see here. No rider intentionally makes a mistake and the start has always been one of the most dangerous moments. That's racing, as they say.

Valentino: “I remember him when he was racing. As a team manager, he was my great rival in the 250 with Capirossi and in the MotoGP with Gibernau and...
3 hours 18 min ago