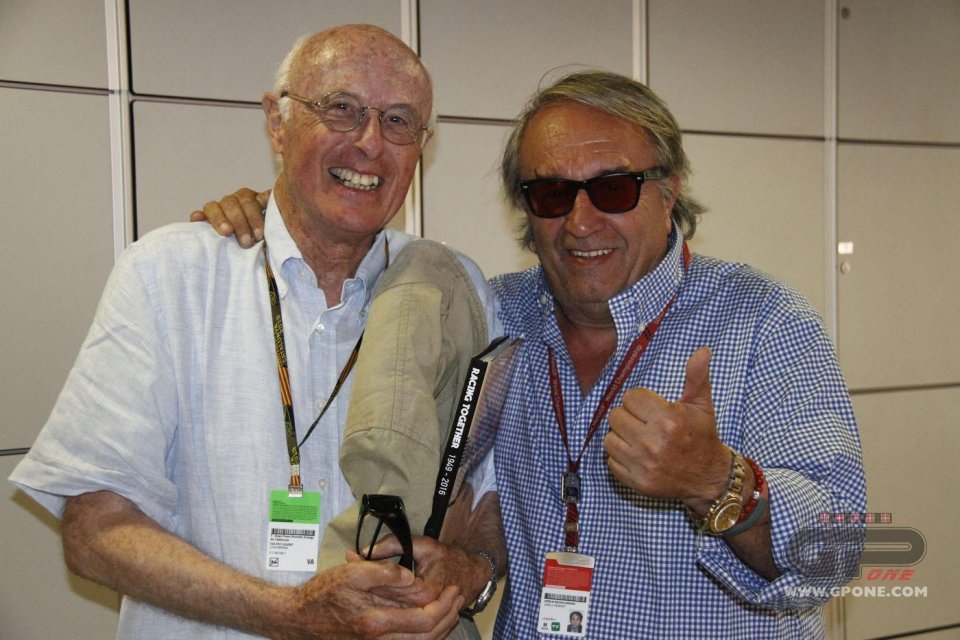 Barcelona brings joy and pain. On the Sunday of Jorge Lorenzo's strike, Marc Marquez benefits and extends his championship lead, while Andrea Dovizioso now trails 37 points behind the seven-time champion. Frustration in the Yamaha camp meanwhile, and just as they appear to have identified the right path, their race is brought to an end just a few kilometres in.

Aside from Marquez, Fabio Quartararo also receives a gift, his first podium in the reigning class, as does Danilo Petrucci, who scores a top-three finish for the third consecutive time.

This is what went on at the Catalunya GP in the words of our very own Carlo Pernat (pictured with engineers Luigi Brenni, fomer CCR President).

“As Sunday draws to a close, I find myself thinking mainly about Marquez, who as well as being an ace is also very crafty. He pretended to be in difficulty with the bike and also claimed Rins to be the favourite for the race. Marc is craftier than Rossi. He got into Rins' head, making him feel nervous, and in the end Alex struggled in the race. He was unable to pass Petrucci, or brake hard, due to his nerves. This time I'd give a 'could do better' to Rins and the Suzuki, that suffered in terms of speed. The race was marked by Lorenzo's strike of course, it appears he's gone to Japan to sign a two-year contract following what happened (he jokes). I want to defend him in part though, as he had an eighteen-month crisis in Ducati, and then just as he started winning, they sent him away. So he recycles himself in Honda, but hurts himself, missing out on testing as a result. In the meantime, Marquez, as sly as he is, has built himself a tailor-made bike. Eventually Jorge loses it and goes to Japan, returning with the conviction that the tank would solve the problem, so he was over-excited. Yes, he made a move that even a beginner wouldn't make. But I want to say one thing: I wouldn't want Ducati to be reconsidering him. At the rate they're going, it's not a given that Lorenzo will continue with Honda and perhaps Dall’Igna might think about it. That's just my hypothesis. For now, the contract with Petrucci has not been renewed, and there's also a fight with Miller for 2020. Waiting to renew with Danilo means waiting for Godot, or rather Lorenzo. Aside from that, Danilo deserves a 10 for his race. He closed the door on Rins, who was really on edge. KTM saw something extra, though still not enough considering what they are spending. Meanwhile, it's something of a disaster for Aprilia, 40 seconds from the front. They need to work hard. Back in the days of the old Aprilia, with Witteveen, they completed 100,000 kilometres of testing. Smith needs to be covering the miles outside of race weekends, as having him race serves for little”.