Marc Marquez is already in 2020. Today, during the Barcelona test, the Spaniard had three bikes available, one of which was next year's prototype. #93 was kept busy with fairings, frames and electronics, working to improve for the second half of the season and prepare for the future.

“Today's test was very important, as we collected important data that will help us identify what path to take in the future," he started. "We took a step forward in the afternoon and will see whether we use these new things at Assen."

“We worked on the 2020 bike to find the direction to take, also considering the second half of this season. We need to evaluate everything at different tracks of course. There have been some positives, some negatives, but I can say I'm satisfied, as things are looking positive."

Marc decided to head out on track today with the Nakagami fairing.

“It was something different and, in the end, it worked well. We focused on the electronics too, an area in which we want to improve. 2020 is still a long way off. Right now, we have a new engine, but we need to understand how to exploit the power more on tracks with little grip like Barcelona."

“Let's just say the work we've done is mainly in preparation for the future. I've tested a new frame, some new aerodynamics. We have the possibility to homologate another fairing, and so we need to make the right decisions. The aim is to reduce wheeling, without losing out on top speed. The wings I used are very similar to the previous ones, though there are some small differences. I don't know if we'll take them to Assen or not. We need to be patient in these cases. If we're competitive in Holland, we'll see what we'll do."

Marc leaves Montmelò with a smile on his face.

“The Barcelona test is the most important of the season, along with Brno, as it helps us understand what to do next. I went out to test Nakagami's fairing to evaluate it in view of 2020. We don't want to lose the rhythm, as we have great engine power, but we need to exploit it’."

“It was strange to see him. He has a very particular style on the KTM. The only thing I'm sorry about was crashing at Turn 4. I lost the front and just went down."

Aside from the Spaniard, Marc also gave a tow to Quartararo and Lorenzo.

“I towed Quartararo a couple of times, but this is a test and different from the race weekend. Lorenzo and I are not carrying out any particular team work, other than the fact that we're both trying to improve the bike." 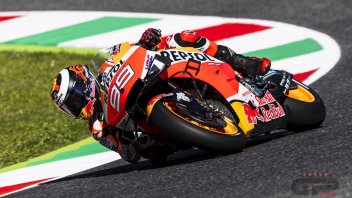 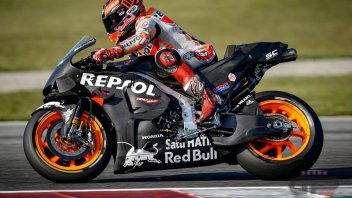 As the situation remains in a state of constant evolution, new dates for the French GP and the recently-postponed Gran Premio de España cannot be...
9 hours 27 min ago

“It would be great for the sport and the country if the interest of the past returned. Hayden was one of my heroes and I cried when he won"
1 week 5 hours ago

The 2020 MotoAmerica Series round at Michelin Raceway Road Atlanta has been postponed to the July 31-August 2 weekend due to the ongoing COVID-19...
1 week 9 hours ago