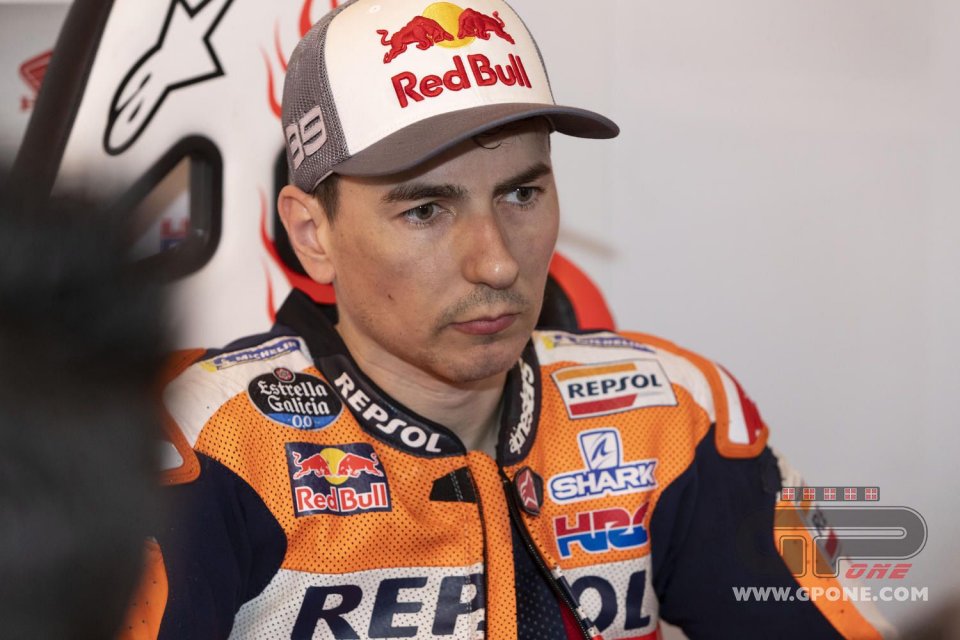 Jorge Lorenzo was the negative protagonist of the Catalan Grand Prix. His perfect shot eliminated from the race the only rivals that could have worried Marquez for the victory and, from a certain aspect, it's almost  ironic that this could be considered his best race since he's been riding for Honda.

However, we mustn't overlook the fact that, even if it ended with a terrible crash, it's undeniable that Jorge Lorenzo was really having his best race for the first time, ever since he's been wearing Honda's colors. The error that triggered the fall that knocked Dovizioso, Vinales, and Rossi to the ground, must not necessarily obscure what good Jorge had managed to do up to that point. But we inevitably must start from that very episode in his statements, also since there's talk of one mistake that alone could cost several riders the championship.

"We can't get back on the track and no one will give us back points, so I fully understand every consideration made by the three riders involved," he said. "It was a situation that favors this type of episode. When you're in a group in the first few laps, everyone wants to try to get past those in front. It could happen that you bump into one in front of you because whoever precedes you tries to curve in the fastest way possible, in order to be able to accelerate well afterwards, like in Dovi's case. I don't think I did anything crazy at the braking point. I just wanted to pass Maverick. The curve was there, always closer, and to not bump into Dovi, I pushed a bit more. With the front brake at maximum, the wheel locked up. As I said before, it depends on the type of corner, and maybe I should also have waited a bit longer to overtake at another time and especially in another corner."

How much do you think the layout of that turn affected the episode?

"I can only say, in my defense, that this type of corner has created many problems in the past. It did it today and will do so in the future. It's a kind of curve that favors these things. Like Valentino said, and I think the same. It's not just this year, but since we started using this corner in that configuration, it has become a corner that favors this type of accident. We've seen several of them, including in Moto3, Moto2, and even MotoGP. It happened to me with Iannone in 2016. It happens because you have no alternative. If you brake too hard, and you can't make it because you have someone in front of you, you end up forcing too much with the brake and you have no other options but to go further in or out."

There are those who attacked you by defining yours a rookie mistake, and even Vinales is determined to have you penalized in the next Grand Prix.

"We're human. I don't think it was a rookie mistake. As always, there are many different opinions about what happened. Each one defends his own point-of-view. My point-of-view is that this type of corner, which we could define a funnel, creates this type of accident. I understand Mavericks' reaction. It happened to me in the past, and I also had reactions like his. I can't say anything, of course. I also went to Dovizioso to apologize, and he accepted it. He took it quite well. But I understand the reactions. These are how races go. I just try to learn a lesson for the future, but I can't change the past. I'm sorry, and I can only apologize to each of them again."

We saw you enter the Ducati and Yamaha pits. What did you say?

"I first went to Ducati to talk. I saw Gigi Dall'Igna, and I apologized. Later I went into the pit, and I apologized to Dovizioso. Then I went to Yamaha to try to talk to Valentino and Maverick. They weren't there. I talked to Maio Meregalli and also to  Maverick's chief technician, but I wasn't able to talk to the riders."

Do you feel sorry for having thrown away your race or for having involved other riders?

"I'm really sorry for the other riders involved. I'm not risking the championship, but I took away lots of chances for each of them. I don't have many points in the championship. A fall doesn't change things for me. I would have preferred to fall alone because I made that mistake, but it didn't go that way. Apologizes are useless, but it was my duty to do it. I understand that no apology is enough."

Besides the fall, the weekend was going well.

"I had a good start. I recovered several positions. It's always complicated in the first laps. There are riders who close the throttle to avoid contact in these situations, and sometimes you can take advantage of this. I did it. I felt good like I had never felt during the weekend. I was strong in braking. In general, we took a big step forward, especially in the race. It was during the race that I understood things which gave me more confidence. I'm on my way to make this bike better or at least better for me. Tomorrow we have many things to try out, and I'm confident that many things can give us something extra. I'm projected towards the test. I want to try the innovations."