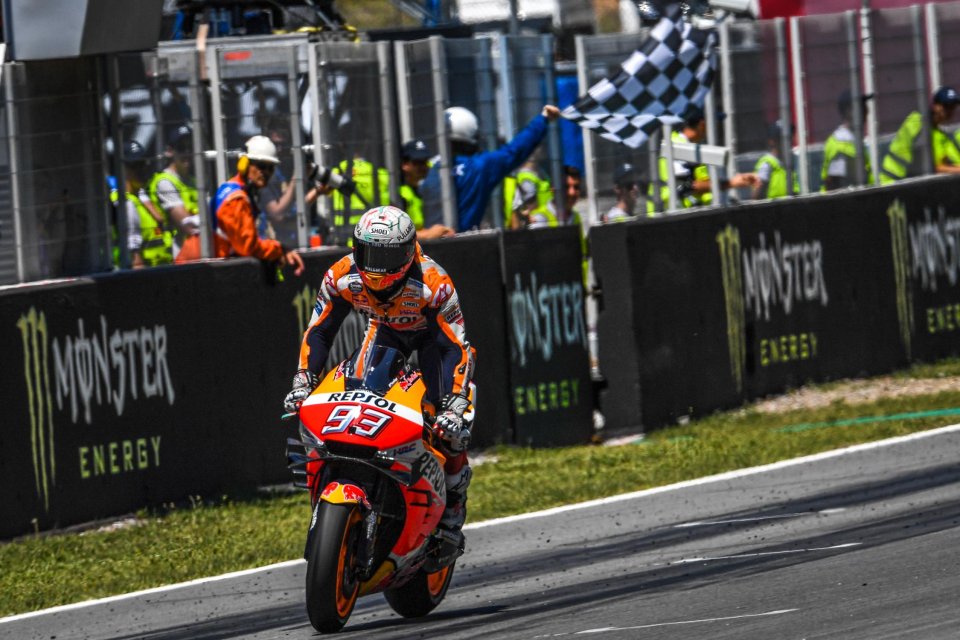 Talent and luck are the key ingredients to win, and Marc Marquez can boast both factors. In fact, in front of his own audience, the Spanish rider was ready to battle, but his teammate's reckless action opened the doors of success to him: an accident that Marc judges as a racing accident, without sinking the fatal blow.

"The accident was a matter of bad luck. It's easy to make mistakes in that turn because it becomes difficult to stop the bike in another rider's slipstream. Penalty? The Race Direction that has to decide. I think it's at the limit, but he doesn't deserve a penalty because he was on the right track. He only had the misfortune of losing the front and hitting the other riders."

Where the accident occurred, that is, Turn 10 (and its two versions), has often been the subject of contention, and more than ever today.

"You can think about safety or fun, surely, this version of the turn is safer than the previous one because the wall is further away. It's a tight turn, but we have other similar ones. If we had a sufficient way to break away, we would use the other turn, which is certainly nicer, but that's not how it is."

We also have to talk about Marc's race and how he managed the situation in the best way possible, imposing a great pace to his race.

I'm honest. The accident made the race easier and luck helped me because if Jorge hadn't taken out Dovi, he would have gotten me. It was still a tough race because Quartararo was very fast. My plan was to take the lead and create a gap, so I mounted the soft rear tire. I kept the pace I had in mind, and then slowed down when I managed to gain five seconds."

On the final, however, n.93 had to sharpen his claws, to stem Quartararo's run-up who, among other things, will no longer be able to take away the title of youngest winner from the Spanish rider.

“I continued to push because, as I had agreed with the team, I hadn't received signals that didn't concern Dovi. I feared the Yamaha at the end of the race, and I still didn't have much potential. I kept the pace and saw that it only gave me a few tenths, so I relaxed. He can't beat my record in Holland anymore? A record is always a record (he laughed) but the championship is more important.

Speaking of the championship, the 37 points earned on Dovizioso are undoubtedly a factor in favor of the reigning world champion.

"What happened was a gift for me, but I don't like this kind of gift. In the championship, I now have a 37-point advantage, but I like to win by battling it out with everyone on the track. In any case, the championship is long and, as we've seen, anything can happen, but I can certainly rider more calmly. When they told me that Dovizioso had fallen, I thought I could risk more."

There is also time to look to the future and to comment on recent excellent performances.

"I'm aware that Assen will be difficult because both Yamaha and Suzuki are very fast in very driven tracks. Then there's the Sachsenring where I'm usually fast, but I don't take it for granted. We suffered with the new bike this year, where we were fast in the past and vice versa. My brother? He's almost in better shape than me. I'm happy for him of course," he concluded, " because we live and train together. "He's a rider who can do everything if he achieves the right confidence. Difficult races will certainly come up but, for the moment, I hope to continue on this line."