If we look at the standings alone, Bagnaia's debut season in MotoGP looks disastrous. A 9th place finish at Austin his best result, and three consecutive zeros in the latest races. But sometimes mistakes are the price a rookie pays while getting to grips with such a complicated bike. And Pecco is able to see the glass half full.

“I've changed mentality since Le Mans and have made some progress. I can now ride the Ducati in a more natural way but unfortunately I wasn't able to demonstrate that in the race in France or at Mugello. In Italy I made a mistake that came down to inexperience, forcing my braking to stick with those up front, the steering locked on a pothole and I ran wide and fell”.

“The margin in MotoGP is much smaller to what I was used to in Moto2 - admits Pecco - But the positive thing is that I was able to ride as I want, fast through the turns, that's what I was looking for”.

Now he needs to put it all together and cross the line come Sunday.

“I've never been a rider who crashes a lot, but I've realised that with the MotoGP you have to push to the max to find the limit - he explains-  I don't like not finishing the races of course, but I need more experience. I don't yet know how the tyres behave over the last ten laps for example, because in Austin and Argentina I didn't push to the limit and was not competitive at those tracks. It was very useful to be in that front group at Mugello, and now the important thing is to finish the race, perhaps holding a little back because finishing is key”.

After a surprising winter, many expected more from Pecco, but not him.

“This is my normal growth path. It would have gone better without the crashes, the top ten was within reach. During winter testing, I started well but then the other made steps. I have to learn to manage the tyres and races better, making a flying lap is basically easy but then in the races there are many aspects to control, while in Moto2 all I had to do was focus pushing from beginning to end”.

His next opportunity is right around the corner, this weekend at Montmelò.

“A track I really like, though I've never scored great results there. It's similar to Mugello and I'm riding the bike that won there last year, so I can do well. We're seeking greater traction and this asphalt should help”. 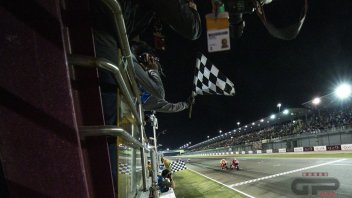 22 races for the MotoGP: the whys and why nots 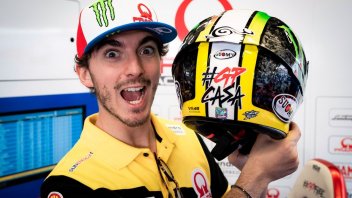 Bagnaia with Mugello’s asphalt on his head

REVISED CALENDAR - The 8 Hours of Suzuka is confirmed on 19th July, financial aid for private teams planned
17 hours 31 min ago

"I was slow last year, but now I have everything I need to stand out. I wanted to win in Qatar, but a fourth place means a lot to me."
4 days 9 hours ago

As the situation remains in a state of constant evolution, new dates for the French GP and the recently-postponed Gran Premio de España cannot be...
5 days 16 hours ago