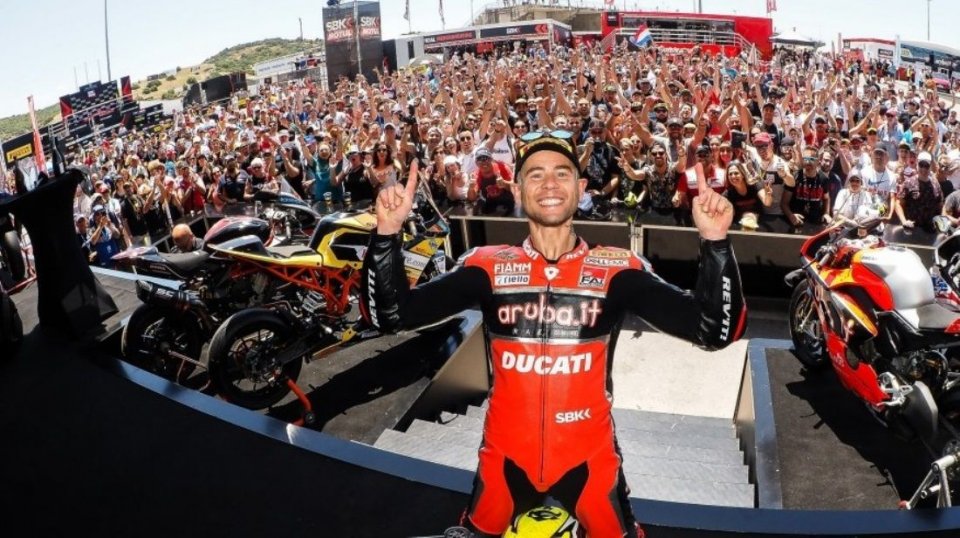 We might have guessed we were in for a heated event, and not just for the almost 50° track temperatures, but also for the fact that teams and riders had tested a Misano just ten days earlier and were keen to see the fruit of their labours.

What we got was a weekend that brought a little of everything. Smiles for Alvaro Bautista and Michael van der Mark, and disappointment for Johnny Rea, who had very different expectations.

The Cannibal suffered defeat at the hands of the Ducati and the Yamaha. And things were even worse Alex Lowes, who returns home licking his wounds, along with Davies.

As if that wasn't enough, we also had the Stewards Panel doing their but to spice up the weekend by inflicting a double penalty on Rea, followed a day later by Marco Melandri too. It didn't take much to turn credibility into comedy.

THE GOOD– As we've said, there were smiles for Alvaro Bautista on the top step of the rostrum as he dedicated his win to grandad Raimundo, but also for Michael van der Mark who scored his first win of the season on the Yamaha. There was also an Italian celebrating in Spain, or rather Federico Caricasulo, who thus relaunches the title fight after the disappointment of Imola.

THE UGLY – Not one, not two but three crashes in a row. Alex Lowes could not have imagined a worse weekend. In the first case, the blame lands with Rea, but there is a risk that past ghosts are returning to haunt him, the Brit having for a time stood out more for his crashes than his results.

THE BAD – Johnny Rea sent down Alex Lowes, no doubts about it. The Cannibal therefore deserved a penalty from the Stewards Panel, though making him start from the back of the grid for the Superpole race was perhaps a little excessive. And we'll overlook the fact they had him on the podium, lifting the trophy. Not exactly a great show, almost a joke. And if you think that was all? No, because then came the penalty for Marco Melandri too, following contact with Davies. A year ago, at this same Jerez track, Dovizioso, Lorenzo and Pedrosa were caught up in an unlucky incident. What should have happened there we ask ourselves?

THE DISAPPOINTMENT – Hands up anyone who saw Chaz Davies at Jerez. The Spanish round should have served as an opportunity to confirm the steps made at Imola, yet the Welshman melted like snow under the Andalusian sun. He'll be resitting his exams at Misano...

THE CONFIRMATION – He doesn't say much but Toprak Razgatlioglu has proved that he knows how to twist the throttle and react in the face of difficulty. Yes, because after something of a disastrous start to the season, the Turk has managed to score two consecutive podiums, or rather one more than Leon Haslam.

THE MISTAKE– There's always a first time, even for Alvaro Bautista as he sent his Ducati V4 into the gravel. The very worst track for the Spaniard to make this mistake.

THE SURPRISE – Hands up those who thought we'd see such a competitive Marco Melandri at Jerez, probably no one. And yet the Italian seems to be on the right track following the latest updates in the Yamaha camp. Contributions that have seen the Japanese bike reach the podium and even score a win.

THE PASS – In the Superpole Race Johnny Rea started last and finished fourth, passing his rivals as if they were bowling pins. The best pass? In our opinion, the 'double' on Torres and Razgatlioglu at the last corner.

THE INTERESTING FACT –Whether as a result of luck or crashes, Michael Rinaldi 's fourth place finish in race 2 is nevertheless his best ever Superbike race result. Let's hope to see him at the sharp end also at Misano!

I TOLD YOU SO – Haslam: “If Razgatlioglu wants the factory Kawasaki in 2020 he'll need to score more podiums than me”. Are you really sure Leon?