Chaz Davies hoped to turn things around after a Friday to forget, and yet the music remained the same. The first clue came during Superpole, followed by confirmation in the race. One in which the Welshman suffered and was forced to play only a supporting role while team-mate Alvaro Bautista stole the spotlight.

In the end he had to settle for seventh place, almost 30 seconds behind the Spaniard.

“unfortunately I'm unable to be fast at any point with the Ducati V4 . I'm really sorry to be so far back after Imola. we need a big change, though the positive of today is that I completed the 19 laps in such high temperatures today. The first time since Buriram that we've seen these conditions, but there I was forced to retire, without finishing the race. The bike is new for all of us and it's hard to find the right sensations”.

Could looking at Bautista's data help or are you on two different paths?

“To be honest, I haven't really been looking at Alvaro so far. Firstly, because I strongly believe in myself and also it's impossible for me to ride like Bautista, who weighs 15 kg more than me and rides with a different style. Aside from that, I only know that Ducati and I need to keep working on something that works for me. we were competitive at Imola and I'm not giving up”.

What's the most complicated point of the bike?

“Unfortunately every point is complicated”.

Chaz, many people said that Johnny didn't deserve to be on the podium today, what do you think about the contact with Lowes?

“I agree with those people. The most important thing is Alex's health, more important than Rea's final position or any penalties from race direction. I'm sorry for what happened to Lowes, it's not the first time Johnny's done something like this”.

One example was Aragon, where Laverty attacked him.

“Exactly. When Johnny's leading the race alone nothing ever happens, but things change when he has to duel with other riders. I think Dorna set a bad example today”. 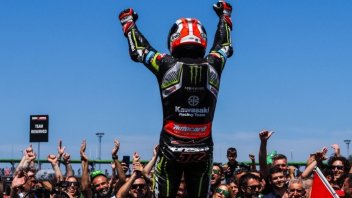 Rea: "Bautista is not invincible. Today I had an angel and a devil on my...