Alvaro Bautista is back, and he did it his way, that is, winning. Actually, dominating. The Ducati's rider was a real steamroller who, once Rea got speared, he raced unchallenged towards a victory. Apart from the incident involving Lowes and Rea, the Spanish rider got all the spotlight.

In short, Bautista won Race 1 at Jerez, in front of the home crowd that applauded him on the top step of the podium as if he were a King.

"What can I say, I won again," the Aruba rider began. "I remember since the days of the MotoGP, there's a substantial difference on this track between the tests and the race. Maybe the pace seemed similar, but the conditions were very different. I'm especially referring to the degrees of the asphalt. So I tried to start strong then preserve the tires without sacrificing performance. It wasn't simple, but I found a great grip, and I didn't find any problems. I think it was the same for the other riders."

Alvaro, what changed as compared to the win in Aragon?

"Winning is always great. It doesn't matter on which track you climb onto the top step of the podium, the important thing is to get on it. This result is certainly special for me, given that this is the first time that a Spanish rider wins at Jerez in SBK. After crossing the finish line, I pointed to the sky with my forefinger to dedicate the victory to my grandfather, Raimundo, who passed away a few days ago. It was really sad for me, since he passed on a great passion to me for this sport but, at the same time, a lot of energy to achieve success."

Many expected to see you duel with Rea, instead...

"I also expected to duel with him but, like I said, the conditions quickly change on this track from practice to race and, in the end, it didn't happen."

You won at Jerez, a track that doesn't have long straights.

"I struggled at Imola, but the situation here was very different, since the track is flat, and the grip is good. Maybe Jerez was not one of the best circuits for Ducati in the past, but now the situation has changed. The bike proved to be strong in corners, especially exiting, and I've always had great confidence with this track."

What do you think of the contact in the final lap between Lowes and Rea?

"I didn't see it well. Seeing it from afar, I can say that I saw Lowes in front, while Rhea was behind. It seems to me that Alex took the turn as usual, trying to keep the inside, while Johnny pulled away hard to pass him inside and then Lowes ended up falling."

If you had been there instead of Lowes, what would you have done?

"I would certainly have made a complaint. But there's the Race Direction that makes certain decisions, and they certainly have made the necessary assessments. In the past, we've seen episodes of this kind several times but, in the end, no one had ever fallen."

But, deciding not to intervene, isn't there a risk that a situation like this will happen again?

"Yes. Apparently, until nothing serious happens, that maneuver is allowed. One thing is dueling, the other is doing something incorrect. Like I said, I didn't see what happened, and I can't give my opinion."

So, we can consider it a racing accident.

"I think overtaking a rider by touching him is not the right thing, something is wrong. But that's how it went this time. It's still strange because sometimes we see serious accidents and no one is penalized while, on other occasions, for maneuvers that aren't at the limit, we're not penalized." 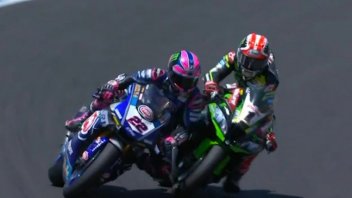 Rea: "Sorry, Lowes, but it was a racing accident"

Dorna signed from 2022 to 2026. The Ricardo Tormo circuit will alternate with the others on the Iberian peninsula but will remain the last race of the year.
18 hours 56 min ago

KTM's sports manager at the gates of 2020: "This is the highest point of engineering applied to motorcycling and has taught us to go beyond our limits"
2 days 18 hours ago

VIDEO - A challenge of reflexes between Red Bull Motorsport athletes, with Verstappen, Gasly, Albon and Kvyat who challenged Pol Espargarò
3 days 14 hours ago