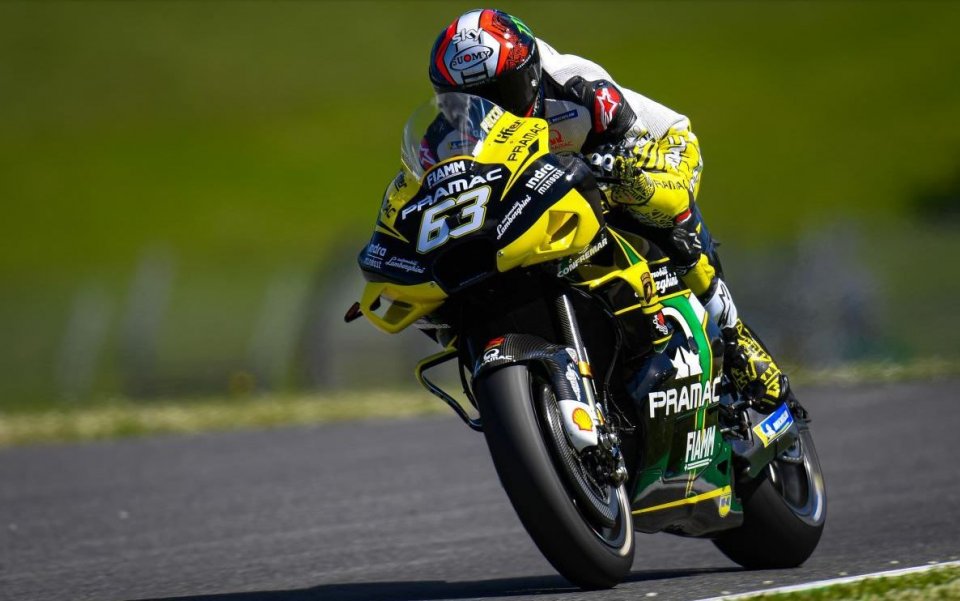 Francesco Bagnaia has rounded out day one at Mugello with the overall fastest time ahead of another rookie, namely Fabio Quartararo. It's the youngsters who have monopolised at the Italian circuit today, both hoping to show their stuff in qualifying and the race too.

“I'm more used to seeing Quartararo ahead than Bagnaia - said Pecco – but us Italians give it our all in Italy, I don't know why, it's as if we push harder. I don't consider myself a favourite for the race, but I think I can do well tomorrow”.

Bagnaia was able to set an excellent reference during his time attack, which shows he has learned more about the bike and is increasingly confident on the Pramac.

“I'm really happy with today's time, but I think it comes down to the work we did at Le Mans. I finally feel confident with the front and can brake hard and maintain good speed through the chicanes”.

If so much work was done at Le Mans, why did that race not bring the desired results?

“My races finish too soon – adds Bagnaia - it was a shame in France because I felt strong but was struggling too much with the passes. Anyway, I've brought those good sensations here and I think our Fridays will be more consistent from now on”.

In the morning's session Bagnaia only set a 1'48.532, which put him down in seventeenth position. What changed between FP1 and FP2?

“I had to get to grips with everything this morning – said Pecco - because Mugello is a tough and fast track. If I hadn't made a small mistake on the last lap I would have been close to the top ten this morning too, but I made an error and finished seventeenth. In the afternoon, as I've said, the front made the difference, thanks to some setup tests. I didn't expect a time like that because I didn't do anything different on that lap, aside from pushing harder. The team has done a great job and even Dall’Igna congratulated me”.

An impressive Friday for Bagnaia who now needs to try and repeat his performance in qualifying. Will today's time get him safely into Q2?

“I don't think I'll go directly into Q2 with this time, not unless it rains in FP3, which would be great for me! We'll need to try and do another time attack. I'll try to be in the same position tomorrow but it will be tough”.