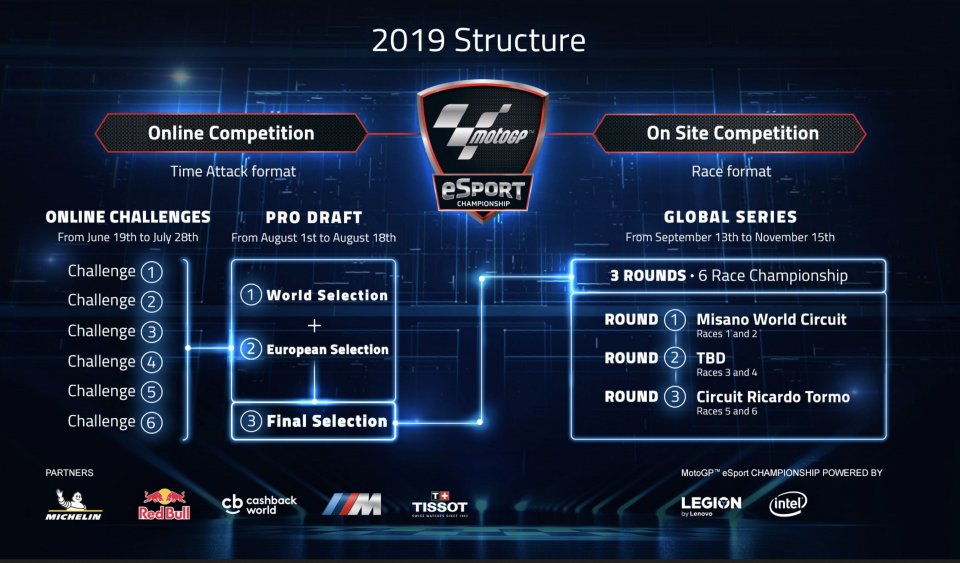 Critically-acclaimed and ever growing, it’s almost time for the third season of the MotoGP™ eSport Championship to begin and in 2019 it’s only going to get bigger – on track and off. Awe-inspiring prizes, incredible experiences and even the chance to turn pro: everything is possible as the series goes from strength to strength.

Over the first two seasons, 16 TV partners have broadcast 351 hours of the MotoGP™ eSport Championship across five continents and digital channels now boast 46 million video views online, a reach of 143 million and engagement figures over five million as the Championship’s online presence across YouTube, Facebook, Twitter, Instagram, Twitch and the MotoGP™ eSport official website only continues to grow.

This year, the Championship will see gamers competing with the brand new MotoGP™19 videogame, which launches on the 6th June on the Sony PlayStation® 4, Xbox One and Windows PC/STEAM platforms. The top prize for the World Champion in 2019 is an incredible BMW M135i xDrive thanks to eSport partner BMW M. This year the runner-up will receive a stunning new Yamaha YZF-R3, the new lightweight supersport bike with a whole new MotoGP™-inspired look and third place will receive some incredible prizes courtesy of MotoGP™ eSport partner Lenovo™.

The first online challenge takes place from the 19th to 23rd of June and from there the calendar of the first six time attack Challenges runs to the end of July. The Challenges are disputed in time attack mode around one circuit with one MotoGP™ rider and bike, with the fastest two gamers per platform and region (Europe-Rest of World) qualifying for the Pro Draft – 72 in total.

From the 1st to the 18th of August, the Pro Draft takes place for those gamers who move through from the Online Challenges. It’s the last stage of online competition, and the 72 gamers compete by region to be one of the 12 MotoGP™ eSport riders. Like the Online Challenges, the Pro Draft is contested in time attack mode – but this time it’s the best of three laps deciding those who move through. Once the 12 riders have been defined, they choose which MotoGP™ team they’ll represent in the Global Series according to the results – so the fastest chooses first.

Selection concluded, it’s then time for the Global Series and action changes from online to on-site as gamers compete face to face on Lenovo Legion™ PCs. 12 riders, three events, six races and only one crown mean it’s everything to play for. The first event sees competitors head to Misano during the Gran Premio Octo di San Marino e della Riviera di Rimini, where they’ll contest the first two races around Mugello and Aragon. The next on-site event is yet to be revealed, but the season finale will, as ever, take place at the Gran Premio Motul de la Comunitat Valenciana alongside the final MotoGP™ event of the year, and it’s the stunning Phillip Island and Jerez the competitors will have to master in their bids for the crown. What’s more, it’s double points for a finale with a bang.

The new era of the MotoGP™ eSport Championship starts now.