Were you busy and missed Elias and Beaubier dueling at Road Atlanta during the opening round? Too much work, the kids, your mother-in-law dropping by and the neighbor's dog distracted you from the competition at CoTA in Austin? Missed the races held at VIRginia Motorways and now you don't know where to catch them?

No problem: Wayne Rainey has your back. If you want to catch up on the action from the first through the third round, just tune in to Eurosport UK, where the "MotoAmerica Rewind Show" will air so you can catch up on all the thrills from both Superbike races from each event that has gone into the books so far this season.

From Saturday, 25 May, reruns will air of the races in Georgia and Texas, followed by airings on Sunday, 26 May of the VIRginia International Raceway action. The Californian President of the American series made the announcement personally: "Eurosport UK will begin airing our MotoAmerica Rewind shows in Great Britain. This will bring the races to our British fans and attract even more exposure to our events, sponsors, teams and our riders. Our series features some of the most exciting racing in the world and we know the British fans are going to enjoy the coverage."

Eurosport's Jamie Steward is just as pleased: "We are delighted to add MotoAmerica highlights to our motorsport portfolio. Eurosport’s Superbike coverage features action from all over Europe and the EBC Brakes Superbike Series will allow us to showcase some of the best racing across the U.S., extending our breadth of coverage and super-serving our passionate viewers."

The MotoAmerica riders will be back on the track in Elkart Lake from 31 May through 2 June for the fourth race weekend of a championship that is still wide open and absolutely spectacular to watch. 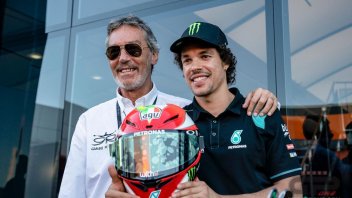 Spaniard, Italian and New Zealander set for induction into the Hall of Fame in 2020 Jorge in Jerez, Maz at Mugello and Hugh later in the year
22 hours 12 min ago

Last week a member of the MotoGP family lost his life.Here are the details of his funeral and a link to a memorial fundraising page in honour of Gary
2 days 16 hours ago

The riders had complained about too many holes: new asphalt for Turns 1, 2, 9, and from 16 to 19, including the return straight.
3 days 20 hours ago