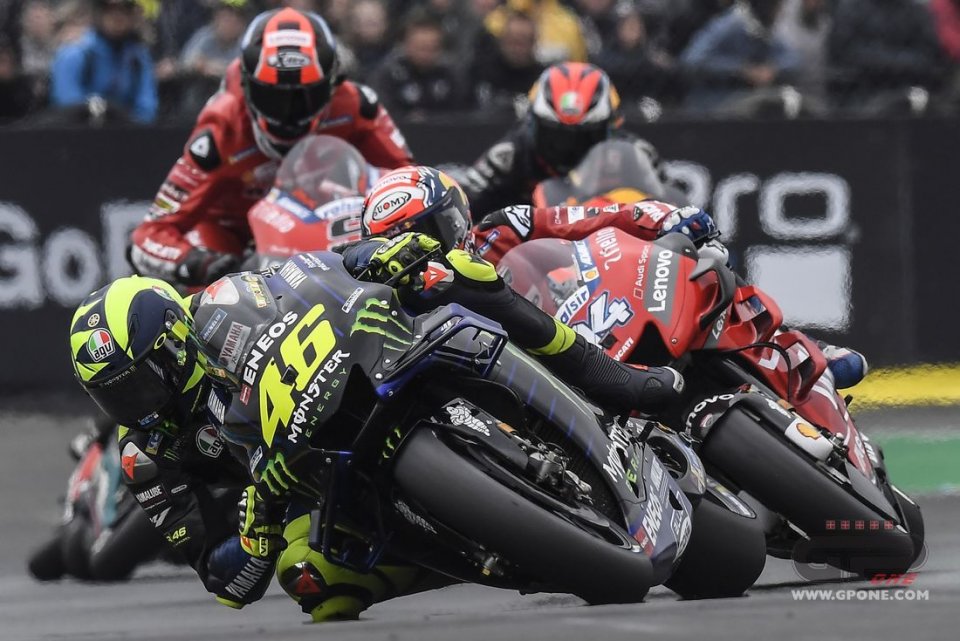 There are now two races in the MotoGP: Marquez against himself and then everyone else's. In the first race, Valentino came out hopelessly defeated (and he's in excellent and numerous company) while, in the second, we can at least see some positive points.

"Marc is the biggest problem of all," admitted Rossi after his 5th place at Le Mans. "Let's face it, without his fall in Austin, he would have already won 4 races out of 5, losing the last one on the last corner. So, it's tough for anyone. Marquez is the fastest and he is on every track and in every condition."

The Doctor's recap is spot on and could be seen as an early surrender.

"I can't deny that staying home as of tomorrow and going to the beach would have its advantages," he joked. "But my words are dictated by realism. This doesn't mean I'll be giving up.  I got close to the Ducatis even today  So, near the best, if we remove Marquez. Right now, I have to live for the day and think track-by-track."

Besides hoping for the future, since the M1 seems to have problems that cannot be solved in the near future. Even if, in this perspective, Valentino seems optimistic.

"The positive thing is that, finally, we're already talking about next year in Yamaha," he revealed. "There are plans we had left behind, and I think this was the reason why we spent some years that were technically difficult. In Japan, they're already working on 2020 motorcycles and engines, and maybe we'll already see the new M1 in the Brno tests. After all, I clearly told the technicians: when we used to win races and titles, the new bike would arrive in August while, in the last few years, we didn't know where it was."

The goal for the future at Iwata is clear: to increase power.

"Have you seen the list of maximum speeds? In this GP, I was last. When things go well, there are two or three higher positions," he emphasized. "It's been since 2004 that the M1 has been suffering on the straights, but now the difference is too great because even our adversaries have improved. As if that weren't enough, for some reason, I'm also the slowest of all the Yamaha riders."

This limit made a difference in the race today. Naturally a negative one.

"Fortunately, I started in the second row, and I had a good start," said the Doctor. "I really gave it my all to stay in the wake of the Ducatis and get on the podium, but it was not enough to succeed. I lost too much in acceleration and on the straights."

Unfortunately, the development of the engine is at a standstill during the season, so improving is difficult, if not impossible.

"We can still work on acceleration, there's room for improvement there." Valentino's wish. "The new hull? We talk a lot about wings but, in the end, they're only a small part of what is needed. Of course it's difficult to fight, and it's a shame because the M1 has a good driveability, and we have also improved in tire management and braking. But we're lacking in power,and we can't do anything about it, even if this doesn't mean that we're not able to fight for the podium. We have our strengths, it depends a lot on the circuits."

Today, Valentino has managed to take advantage of them, as did Quartararo.

"I expected Fabio to be fast but not like that. I think he's the surprise of the championship," was Rossi's opinion. "Here at Le Mans and Jerez he went really, really fast. It's a positive aspect because I can study it to understand how to improve even more:"