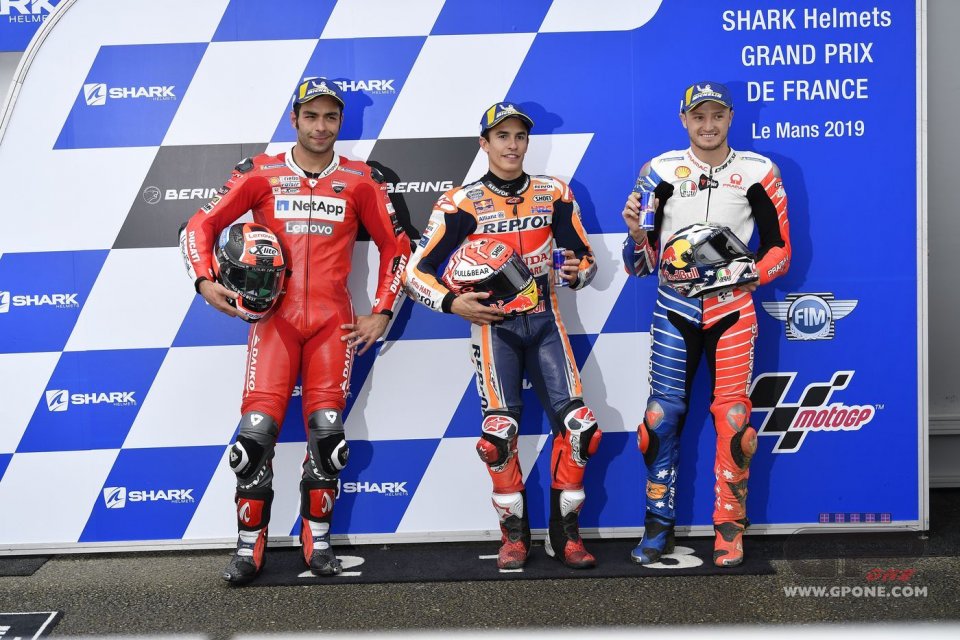 There will be three Ducati that will be racing for the podium at Le Mans, but Danilo Petrucci and Jack Miller, who will start in the front row next to Marc Marquez, will both start in front of the foreman, Andrea Dovizioso.
A delicate position, given that Marc has the ability to break away recently.

After all, the world champion, who reached his 55th pole here, equaling Rossi's record in the premier class, admitted: "Starting well, in front, allows you to choose your trajectories, ride better and, at the same time, not stress the tires. They always give the points Sunday afternoon, but starting in front of the others sets the stage for a victory."

So will Danilo and Jack be allies or rivals? Dovi has no doubts: adversaries like the others. Both, in fact, are looking for a result to confirm themselves on the Ducati. Even if the best strategy that they would need for them to do it - do their best or put themselves at the service of the first ride - is unknown to all but Claudio Domenicali. Borgo Panigale's CEO always has the last word when it comes to the riders.

The discriminating factor for everyone will be the condition of the track. If, in fact, they won't be defined - dry or wet - we'll be playing the odds at the Grand Prix to justify Petrucci's assertion: "those who remain standing will be those who win."

In the worst case scenario, during the tests, with a wet, patchy asphalt, the most favored will however be Petrux and Jackass.   Not so much, or just because, both are experts on wet asphalt, but because "compared to me and Dovi," explained Marquez, "they have less to lose."

In the event of a "bumpy" track, being behind is an advantage.

However, it's also true that, in a global perspective, neither Petrucci nor Miller represent a danger for the two antagonists. On the contrary, in the case of an absurd track, someone offers important information on the condition of the asphalt. Obviously, as long as you don't take too much advantage of it.

The only thing that is,therefore, certain is that, more than opening the throttle with the current weather forecast in the French Grand Prix, they'll need to have their brains always on and connected. Valentino Rossi and his specialty who, from the second row - the best Yamaha rider  - will have the chance to study his opponents' moves calmly during the first few laps.

Rossi is always a white shark ready to attack... the podium.

Vale hasn't won for almost two seasons and, right here, in 2017, his success faded for him while he was chasing his teammate Vinales. So Rossi declared that, since nothing replaces the first spot on the podium, he must try at all costs to obtain it when the opportunity presents itself.
Who know if he still thinks the same.

In our opinion, the Phenomenon is like a big white shark who is no longer able to venture into shallow water but, where there's a seabed, he remains a formidable predator.

Marquez: My rivals always remain Dovizioso and Rossi. They are the most intelligent and consistent.

An idea shared by Marquez who indicated his main rivals as being Dovizioso and Rossi. And said by someone who, since he's been in the premier class, has only got passed the second row three times, is saying plenty.

Then, of course, wet races always have a high coefficient of unpredictability. But here Marc doesn't add among his adversaries Alex Rins - who appeared a bit weak during the entire weekend - nor Jorge Lorenzo, who is growing but is still not  master of the difficult RC213-V.

Even the young, impetuous riders, Morbidelli - in the second row with his mentor - and Quartararo - best in the fourth row - seem less dangerous. Who knows. This is a strange Grand Prix. One of those races where, with special conditions, anyone can win, or have an excellent race. Think of Jack Miller's first (and so far only) success in Assen. Then Aleix Espargarò with the Aprilia, maybe, or his brother Pol Espargaro, both with nothing to lose, could go all the way.

He who, instead, will have to try for a good hand at all costs is Maverick Vinales. As always, after great  practice sessions, he evaporated into qualifying, having to settle for starting from the fourth row, in eleventh position.

In addition to points, there is also the leadership at Yamaha.

Chrissy Rouse sustained a significant head injury. He was stabilised and put in a medically induced coma at the medical centre by the BSB medical...
20 hours 25 min ago

This is the first time there have been two or more rookies on pole position in a single premier class season since 2006 with Dani Pedrosa, Chris...
1 day 19 hours ago

The video circulating on the web reveals a disconcerting episode in the Moto3 paddock. Tom: “I kept quiet because I wanted to keep my ride. That’s...
2 days 18 hours ago

“I was leaning too much. It happens when you push on a MotoGP. I have injuries all over my body. I’ll have to wait and understand my condition. It’s...
3 days 13 hours ago