Although slowly, Lorenzo is climbing back up in the rankings on his Honda. Yesterday was a good 4th on dry asphalt. Today, on the wet - usually not his favorite conditions - 8th in qualifying, which is worth a third row for the Le Mans race. His sensations, however, are even better, and he doesn't hide the fact that he could have gained some positions.

"I put the wrong tire on at the wrong time,"  admitted Jorge. "I started the session with a  soft, but there wasn't enough water, then with the medium, it  increased.  I could have done more with the right choice."

Despite a non-perfect strategy, Lorenzo got the answers he hoped for from the RC213V.

"It was my first chance to ride it in wet conditions, and the sensations were pretty good," he revealed. "Honda is competitive even in the rain, but I need more time to understand it. Despite this, I wasn't far from the best."

Which is a good foundation for tomorrow's race.

"Everything will depend on the weather," warns the rider from Mallorca. "Like I said yesterday, what matters is the result of the race, but to give it your all, you must be able to prepare yourself better.  Unfortunately, I didn't ride much in  dry conditions, although I demonstrated that I  made progress, and now I can ride more naturally. If it doesn't rain tomorrow, I think I can be faster than yesterday, but I don't know what the level of my opponents will be."

Lorenzo also still has to come to terms with his physical condition. His situation has improved, but his scaphoid still gives him some problems.

"The healing process is long. It will take 6 months for it to be perfect," he explained. "I feel better every week, but I still don't have the strength I would like. I lose a little when braking, when changing direction, or when I need to straighten out the bike quickly. It's not a big problem, but it takes its toll." 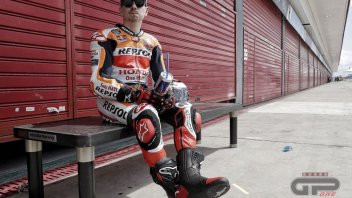 Honda ultimatum to Lorenzo, but he denies it

"When things are not going well, you can feel the weight of the name on your shoulders. My goal for 2020? Improve myself"
3 days 14 hours ago

Englishman suffered a fracture and dislocation of the right shoulder. The British rider suffered an injury during a fall at this week’s private test at the Jerez-Angel Nieto circuit
3 days 23 hours ago

The story starts on the Isle of Man in 1949, Harris has been at the centre of the sport for decades, getting to know the riders as individuals
4 days 1 hour ago

The FIM has published the updated entry list. Besides the reigning champion, Ferrari, we find De Angelis, Canepa, Casadei, Marcon, and Zaccone
5 days 16 hours ago

PHOTO. Tunnel tests on the GSX-RR to improve the bike's aerodynamics
5 days 17 hours ago

From 11 February at 9.00 a.m. until 21 February you can participate in the auction for the purchase of Fabio Quartararo's helmet on EBAY.
5 days 19 hours ago

"These are things that take away your concentration, I have to think about being a rider. My pace was similar to the best guys and I understood many things about the bike, I am satisfied"
6 days 22 hours ago