Marc Marquez has made the most of the break following the Jerez GP, dedicating himself to other sports, albeit only as a spectator. First he went to Barcelona for the F1 race, then to watch the Lipsia - Bayern Munich game. He did it in his own way of course, putting on something of a show for the fans with his Honda.

Now it's back to work for the Spaniard. He has the opportunity to give Honda a special gift in France, in the form of win number 300 for the Japanese manufacturer in the reigning class (the first came 53 years ago, with Jim Redman on the RC181).

A goal that is clearly within Marc's reach, he and his RC231V in great shape, as confirmed during the latest Jerez race and test. 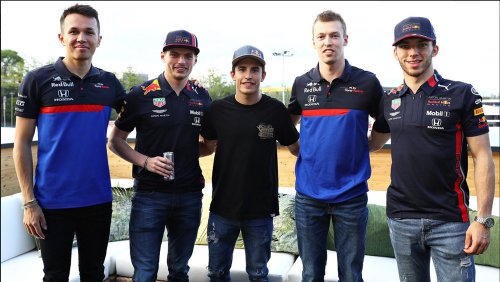 "We had a very strong weekend in Jerez and a productive test but this is MotoGP and we must always keep working. Between races I was able to relax a little bit at the F1 and also the Leipzig versus Bayern game, riding my bike in the stadium was great and the noise was incredible."

And now it's back to it in France.

"Le Mans can be a tricky GP, especially with the weather so we must be prepared for any conditions - he comments - Last year I was able to win here but we always face a lot of opposition.”

LORENZO SEEKS A COMEBACK: "THE JEREZ TEST WILL HELP US IMPROVE"

Jorge Lorenzo has other concerns heading into the next GP.  The Majorcan has not yet been able to fully exploit the Honda, but the Le Mans track is one at which he's been able to make the difference in the past, having clocked up five wins.

The Jerez test (and race) proved complicated due to two crashes, but at least the day served to increase his experience.

“After a tough weekend I am pleased to be able to get back on the Honda without too much time between races. In the past, I have gone well in France but we will need to see how this weekend goes. The test we had on Monday after Jerez was productive and importantly I was able to get more time on the bike which should help us to understand and improve.”

Until May 29th, you'll be able to buy some of the best shots taken during the World Championship. All proceeds from sales will then be donated to the...
14 hours 37 min ago

The two first events of the season have now been authorised. The first race week will take place at the Circuito do Estoril, followed by the...
19 hours 2 min ago

The Californian Yamaha rider took the flag alone ahead of teammate Gagne and Herrin, who beat the Ducati rider in a photo finish. Elias crashed out...
4 days 20 hours ago

Defending champion wins ahead of Scholtz and Gagne. 5th and 7th, Wyman's and Jacobsen's two best Ducatis. Elias stopped by a problem.
5 days 11 hours ago

The reigning champion started has started 2020 in the best possible way, heading his teammate Jake Gagne. Race 1 at 22:00 on Eurosport
6 days 9 hours ago