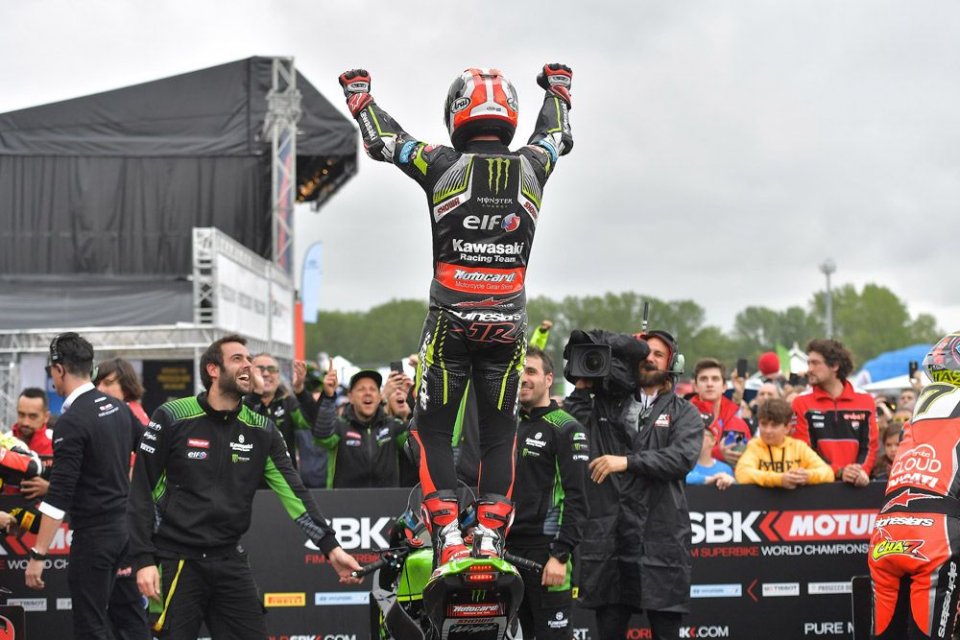 Third time was a charm in Imola and not because of Rea. The Kawasaki rider, on a winning fast since the beginning of the year, would have gladly continued his binge on the Santerno, but the rain made the Race Direction decide to cancel the last scheduled race.

"The third race was canceled due to the weather, and it was a real misfortune. But I completely understand this decision, and I'll have other opportunities to win." The British rider didn't argue.

Having stopped Bautista and Ducati was nevertheless a reason for satisfaction. The Johnny-ZX-10RR duo is back to the glories of the past. The question is whether this competitiveness can also be maintained in the upcoming events.

"We had nothing new, but this is a track where the rider can make a real difference," was Rea's response. “At Assen, it was tough not to fight for the win because that was a good track for us, for my motivation, and the championship. I needed to have a good weekend. So, in the past few days, I've reduced the pressure a bit, and now I'm happy."

"It was a very special circumstance. I don't expect it to be the norm," he continued. "We still have a long way to go to reach them. It was enough for me to ride behind Chaz to understand that there is still a lot of work ahead of us."

At Imola, they could at least catch their breath and recuperate their morale. Also thanks to Pirelli.

"The new rear tire works well on our bike. It's consistent and gives me a lot of confidence. It was an obvious choice for me. I know that I was probably the only one to use it. It works particularly well with Kawasaki. This represents a step forward," explained Rea. "It was, however, a positive weekend because of the sensations I had on the seat. I was able to get the most out of my bike. I'm very happy, and I have to thank the whole team for continuing to believe and push forward. We had a perfect opportunity to win, and I took advantage of it."

In a certain sense, the British rider seems to know that a mark has been left on the season. It'll be difficult to even the score with Ducati in just a few months. The Kawasaki would need more horsepower, but that's not the solution to every problem.

"If you were to give me a 250 hp tomorrow, I think all that power would only create more problems," he reflected. "It's a question of balancing and having a good overall package. Surely, we need more power, but maybe we need to find a different way to be able to be fast. I hope the technicians can react quickly, but it's already May."

However,  there are already rumors of a new model, which should still have an in-line engine. Is this the right solution against Borgo Panigale's V4?

"I'm not the right person to answer because, having never ridden a motorcycle with a V4, I have no experience in evaluating the pros and cons," Rea stated. "It only happened with the RC213V, but that was a MotoGP, and the tires were completely different. I can't make assessments. I'm sure our engineers are very intelligent, and I have no idea what their next projects will be."

We'll tell him: A special version of the ZX, produced in a few hundred copies. A standard racing bike resembling the Panigale V4R.

"Really? "Not bad," Jonathan laughed. "We know we're no longer the reference point. We need to improve, and we just have to keep working. They're very motivated at Kawasaki. I can imagine that they’re also a bit frustrated, but it's also true that we have enjoyed 4 years of victories, and we need to learn from this lesson and move on. It'd good to have a new reference because I'm sure they'll react in the right way. When things go wrong, it's easy to make the wrong decision, but you just have to keep your head down and keep working, that's what we have to do."

The Dutch team (which was supposed to run with Tom Toparis and Gianluca Sconza) has postponed its debut in the World Cup due to the financial...
2 days 4 hours ago