Last year, the MotoGP at Silverstone was left with egg on its face when a little rain (not that unheard of in the UK) left the track in a disastrous state. This was due to the new asphalt, which did not drain, leaving the track looking more like a lake. The race was cancelled and those responsible for the track promised to get things fixed.

They have stuck to their word, the whole track set to be resurfaced next month. “Silverstone confirms the full resurfacing of the track and the extension of the MotoGP contract with Dorna until the end of 2021” reads the official Twitter statement. 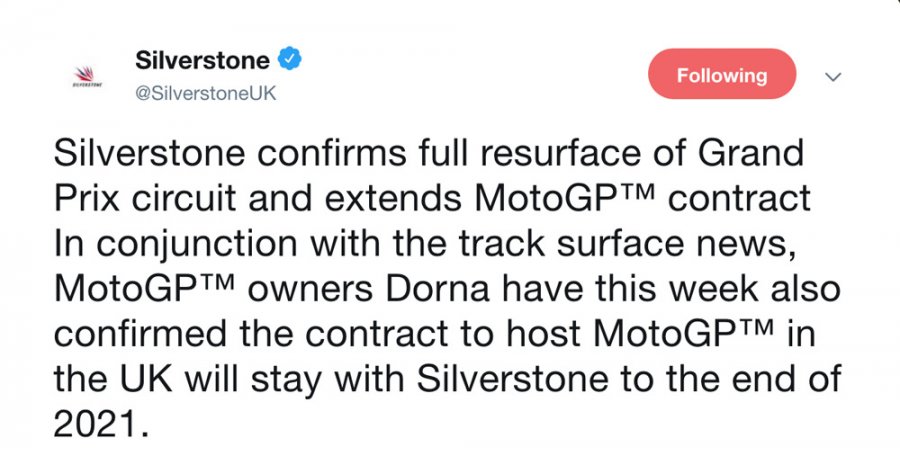 Work will therefore get underway in a few weeks time and will not be carried out by Aggregate Industries, responsible for last year's disaster, but by the Tarmac firm. Planning and supervision is left to Jarno Zaffelli 's Dromo, the company that redesigned the Termas de Rio Hondo track and took care of resurfacing works at Mugello and Sepang.

“The FIM found it to be so serious an issue that they gave us very specific instructions linked to getting our track licence, so we had to get it done”, the circuit's managing director Stuart Pringle told MCN.

Work will be completed during June, so the Formula 1 drivers will be the first to test the new asphalt in July, while MotoGP will take to the Silverstone track in late August. It is almost impossible for a test to be arranged prior to the GP. 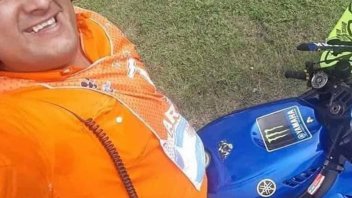 The selfie of the Rio Hondo Track Marshal becomes viral

"When things are not going well, you can feel the weight of the name on your shoulders. My goal for 2020? Improve myself"
4 days 6 hours ago

Englishman suffered a fracture and dislocation of the right shoulder. The British rider suffered an injury during a fall at this week’s private test at the Jerez-Angel Nieto circuit
4 days 15 hours ago

The story starts on the Isle of Man in 1949, Harris has been at the centre of the sport for decades, getting to know the riders as individuals
4 days 17 hours ago

The FIM has published the updated entry list. Besides the reigning champion, Ferrari, we find De Angelis, Canepa, Casadei, Marcon, and Zaccone
6 days 8 hours ago

PHOTO. Tunnel tests on the GSX-RR to improve the bike's aerodynamics
6 days 9 hours ago

From 11 February at 9.00 a.m. until 21 February you can participate in the auction for the purchase of Fabio Quartararo's helmet on EBAY.
6 days 11 hours ago

"These are things that take away your concentration, I have to think about being a rider. My pace was similar to the best guys and I understood many things about the bike, I am satisfied"
1 week 14 hours ago