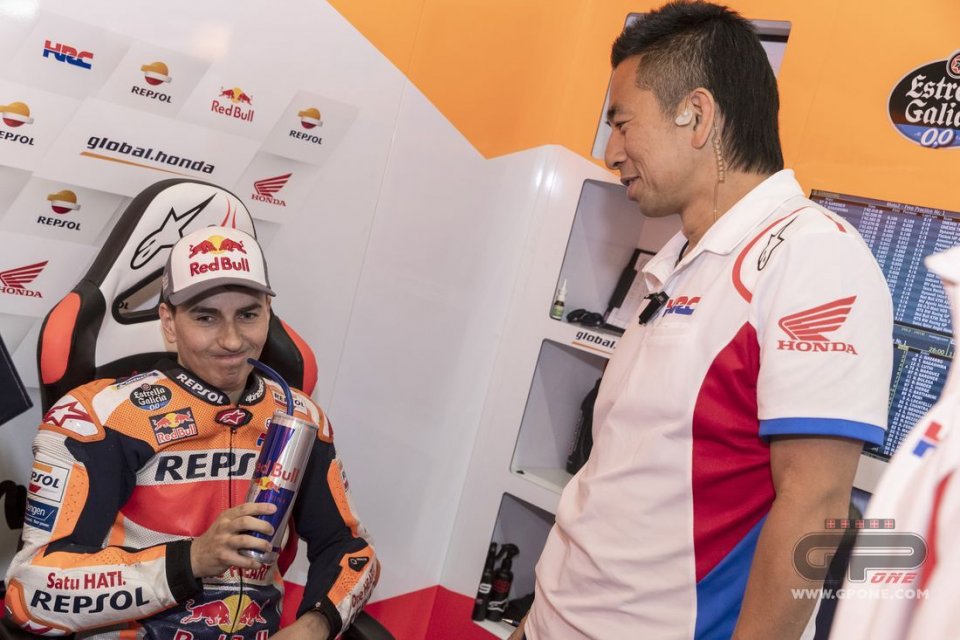 “I expected to be more competitive”. Lorenzo isn't shy come the evening at Jerez, his 'lucky track' as he calls it. First free practice went well, the rider finishing second behind Marquez, before the afternoon brought a few difficulties and a ninth-place finish, which became fourth in the combined classification.

Good but not great…
“In the morning I practically replicated the times I set in November's test, which was positive. I had more problems in session two, I need more experience on the Honda. When the track conditions change, I struggle to adapt the bike”.

What have you tried?
“A very different set-up in FP2, but it didn't work. I realised it was not the way to go and so we'll try another and see if we can get closer to Marquez, who is the quickest right now”.

Did higher temperatures make a difference?
“We lost a little power and grip in the heat, but other riders' times stayed more or less in line with those of the morning. I had new problems, I have to solve them with the setup”.

Who is the real Lorenzo: the rider we saw in session one or two?
“The race on Sunday is at 2pm, so I have to say that the reality is what you saw in the afternoon, where I struggled more. I have chance to improve on Saturday though”.

What are you missing with the Honda?
“It's a very small bike and I don't feel totally comfortable on it yet, especially in braking. I am straining my arms too much and get tired after a few laps. But the Honda is a powerful and winning bike, I just have to find my way”.

Marquez has said he was surprised by your corner entry speed…
“I am able to brake late here at Jerez but I still have trouble stopping the bike in a tight space. I actually enter the turn a little late and that prevents me from having good speed on exit. I need to improve”.

What do you need?

“Time, but there isn't much of it. We only have a few tests and you don't have time to try many things over a race weekend. For example, in the past I could make the difference through the fast turns at Jerez, while now I'm losing 2 or 3 tenths in that very area”.

Many want to see you running at the front…
“You think? I don't know, the other riders would definitely prefer it if that doesn't happen  (he laughs)”.