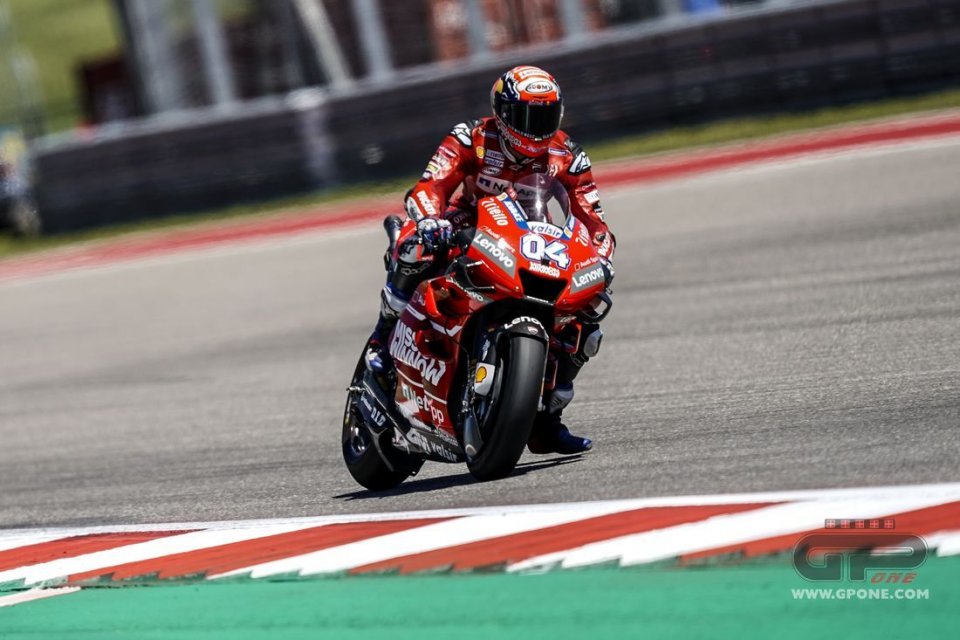 Ranked number one in MotoGP after the first three rounds, Andrea Dovizioso and Ducati couldn't have started this season any better. The Italian rider has 54 points. Not far behind are Valentino Rossi with 51, Alex Rins with 49, and Marc Marquez with 45.

In December 2018, Andrea Dovizioso spent an afternoon in Curno at the Brembo Racing headquarters where the braking components are designed, produced and tested for use in MotoGP, Formula 1, and other international motorsport competitions.

Once again, he confirmed what technicians who have worked with him in the World Championship have always said and what has earned him the nickname "rider-engineer": He has a sharp ability to scientifically analyze the behavior of the bike and is skilled at making improvements to the motorcycle, which he has demonstrated with the Desmosedici.

As soon as he entered the show room, Dovizioso started asking questions about the caliper and brake disc combinations on display for the Formula 1 single-seaters and prototypes. He continued to ask the engineers questions inside the plant where the MotoGP brakes are produced. “I saw a lot of precision and a level of engineering that I imagined existed but didn't believe until I saw it. The amount of checks and the serious approach to work and materials is intense, which makes sense because braking is an essential aspect of racing,” he said before heading back to Borgo Panigale.

"MY IDEAL BRAKES? RESPONSIVE AND PRECISE"

Andrea has his own way of viewing braking, “I am very demanding when it comes to braking because I've always been one of the strongest riders in this area and I've always been particularly sensitive with the brakes. For me, it's essential that I have responsive, precise brakes. I usually brake by applying just two fingers on the front lever.”

As of 2017, Andrea Dovizioso has been the only rider to make Marc Marquez worry on a continual basis. Proof is in the second-place finishes he secured in the 2017 and 2018 final classifications, as well as his GP race wins: The Spanish rider won 16 and Dovizioso won 11. No other MotoGP rider earned more than four victories overall. 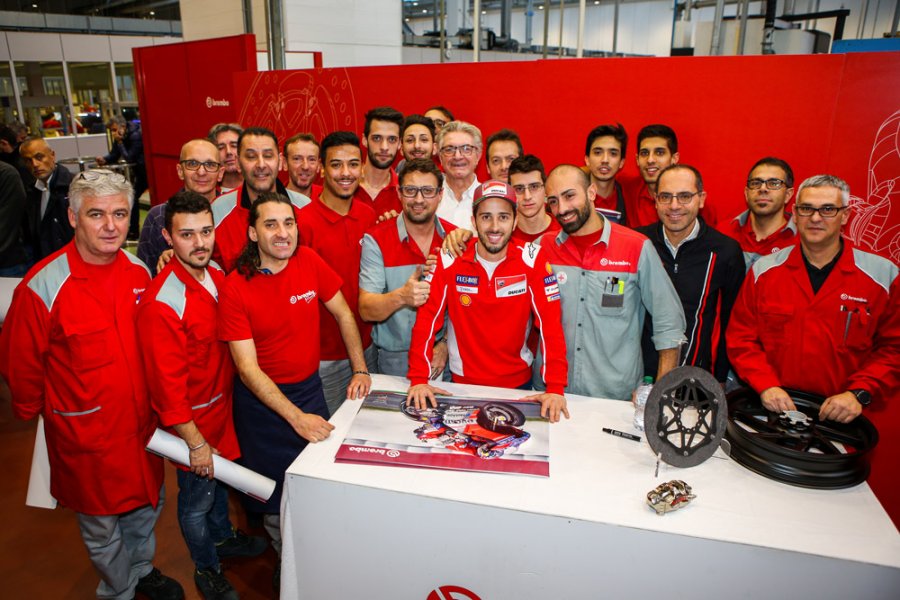 "I USE THE THUMB MASTER CYLINDER, BUT ONLY WHEN THE BIKE IS AT THE MAXIMUM LEAN ANGLE"

It may be just a coincidence, but this time period corresponds directly with his using the thumb master cylinder more regularly. This solution was created to help Mick Doohan return to riding 500cc bikes after his accident in the qualifying laps of the 1992 Dutch GP. The accident was serious enough that he risked amputation of his right leg, which had been crushed. Doohan was unable to use his right foot so Brembo technicians designed a thumb master cylinder that enabled him to use the rear brake anyway. Instead of a right brake pedal, the rear brake was operated by a hand control positioned on the left part of the handlebar. This ingenious solution helped the Australian go on to win five consecutive World Championships in the 500cc class, from 1994 to 1998.

Dovizioso hasn't been using it for long, however. “I used the thumb master cylinder back in HRC, but then I shelved it. I took it up again with Ducati and I'm pleased so many other riders have discovered it. I only use it on right-hand turns because when you're in the middle of the curve, it isn't possible to operate the rear brake with your right foot. To do this, some riders keep their foot forward, others move it to the tip of the footpeg.” Some use the thumb master cylinder to avoid skidding when cornering, but Dovizioso doesn't, “The force you can apply with your finger on the thumb master cylinder is a great deal less than what you can apply with your foot. That is why I only use it when the bike is at the maximum lean angle”.

"THE CARBON DISKS ON THE WET? THEY GIVE US MORE CONSISTENT BRAKING"

Andrea Dovizioso was the second rider ever to win a wet MotoGP race with carbon discs. He did it at the 2017 Japan GP, even though the rain didn't let up once during the 24 laps. The air temperature that day didn't go over 14°C (57°F) and the asphalt never went above 15°C (59°F).

Dovizioso is enthusiastic about this, “It is good news because it gives us more consistent braking, like on dry surfaces, and for a rider that overtakes like I do, this is critical. Of course, it isn't easy to manage this situation or to keep the brakes warm when it is really cold out, but I think it is a huge step forward.” At the 2018 Valencia GP, Dovizioso once again won in the rain with carbon discs, “We raced in conditions that were borderline, but we managed to make them work well. In the pause between the two races (the GP race was interrupted, then it started again, Ed.), we modified the bike so I could brake a little harder.”

Dovizioso has used Brembo brakes for more than a decade. He said, “In 125cc and 250cc there was very little room to personalize the brakes. You just need to find your set-up and the rest comes about as a consequence. In MotoGP on the other hand, everything is extreme and in the last decade the brakes have changed a lot. Both the diameter of the discs and the height of the braking band have increased, and there are many different combinations available. The brake calipers have undergone a technological evolution too and there are more options available for each rider to choose. We are heading towards a scenario where there are no more limits”.

Just like every talented rider, Dovizioso has specific requests for the technicians who equip his Ducati, “I like to have a great deal of responsiveness and the least amount of play possible on the lever before I hit the brakes. Brembo has worked hard to improve this aspect over the years. Racing with an Italian motorcycle and Italian brakes makes getting good results even more satisfying.”