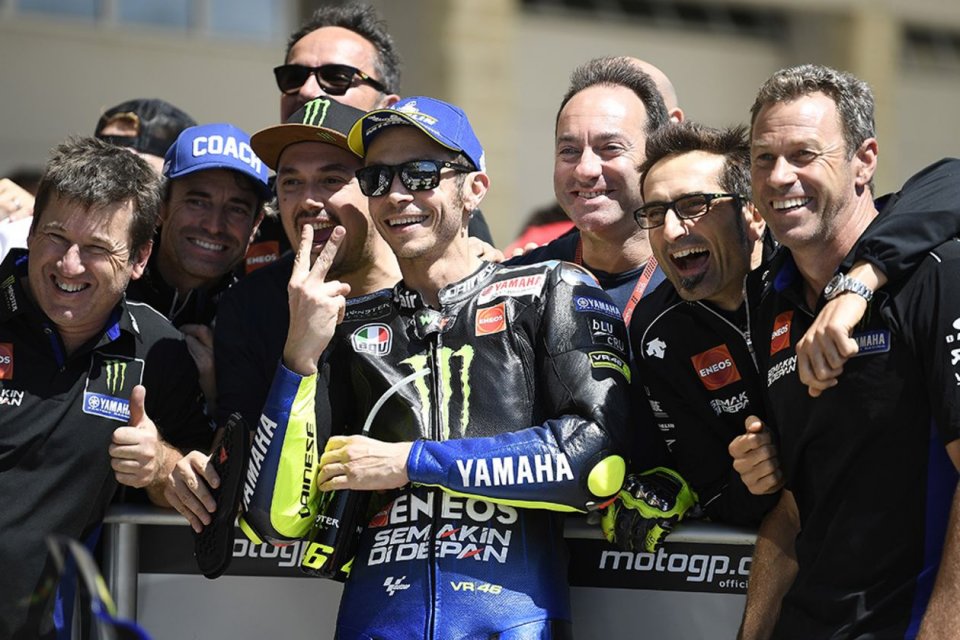 Up to very last meter, Valentino Rossi made an attempt to reach a victory he has missed since Assen 2017. The occasion was really tempting, since Marquez had eliminated himself. Unfortunately,  there was nothing  n. 46  could do. It was Alex Rins who threw a monkey wrench in the race. After having shortened the gap between him and the nine-times world champion, he went in for the winning kill.

"What can we say after a race like this," Rossi began. "On one hand, I'm sorry because I haven't won in such a long time. But, on the other, I'm happy, since I managed to be competitive.  Perhaps, today was an opportunity to achieve success, but after Rins passed me, I made two mistakes on the brakes. I'm really sorry, since it was a good opportunity to win. But we'll keep trying, without giving up."

What do you think made the difference in that finale?

"Rins was better on the tires and used his acceleration well. His lines were also good, and he avoided the holes. This was more or less the question. If I had been perfect, I might have tried an attack at the end, but then we have to see how it would have ended. Besides that, we brought home 20 important points."

In the end, however, you were very close. There seemed to be an opportunity for it.

Today, Marc decided to do you a great favor by eliminating himself.

"At the start, I tried to stay close to Marquez, but he managed to take off. He has some secrets on this track. In fact, when braking and in corners, he has a better pace. Honestly, I didn't expect Marc to fall. I got excited, and it took me a moment to realize what was happening. However, these are things that can happen when you're at the limit. In those cases, there's a fine line between being a hero or a jerk."

There was no victory, but how important is this second place?

"Very, since we were able to find the right direction, and I'm excited about this start of the season. I was competitive on all three tracks. Like I said before, I'm getting along well with this work group. Unfortunately, nothing has happened in the last two years, and that was a problem. I'm convinced that, if Yamaha commits itself like it's doing now, it has the potential to win the World Championship. Great things happen, especially during the winter, and that's where you have to try to do things differently."

You mentioned the World Championship. Do you think that after today something will change in the race towards the top?

"It's all very up in the air, but Marquez is still the favored.  I personally hope to be there and fight to the end. As we can see, it's a very leveled Championship with four different bikes in the top spots. The numbers say it's balanced, but we must not forget that Marc fell today, otherwise, he would had already broken away. Certainly, the regulation made the weekend very busy. In fact, you have to manage the tires and always be in the first ten in each session. To this regard, for example, we saw Dovi remain out of the Q2.”

With these performances, do you think it's possible to race for your tenth title?

"It's too early to say, since it depends on what happens in the weekends to come.  MotoGP is like the F1 where everyone works continuously to improve from one race to another. We must obviously get these 20 points, but keep our concentration."

In the parc fermé, Rins was surprised because he beat his childhood idol.

"Regarding these young riders who say this is a story that has already been told, that's not true. This worries me because those who said it, turned out to be my most worst rivals" (he smiled).

Texas is over, now back to Europe. What do you expect in Jerez?

"This was one of the most difficult tracks in the last two years. So, it'll be an important test to see if we'll be fast or not. It was a disaster in the past, since we suffered. So, we'll have to try to work to start off on the right foot."

One last thing. How do you explain the fact that, apart from your Yamaha, the others are all behind?

"Until today, I was doing well. I had ridden well. So, I'm happy and proud. I also work to be the first in Yamaha, so I'm enthusiastic."