"Want to know how I fell? I'll explain in detail: compared to my fastest lap, I braked three meters later. I was 2 km/h slower, with two degrees of inclination, and more and less pressure on the brake," Marc Marquez translated into numbers the fall with which he threw away the chance for a 7th consecutive victory in Austin.

"That’s what the data say. Nothing that different from the other laps. But I made a serious mistake, and it definitely annoys me," Marc admitted. "Then you know that I'm always positive, so we mustn't dwell on it too much."

The Honda rider has the habit of seeing the glass always half full. But his face says a lot this time. This wasted opportunity stings.

"Sometimes, things happen, but they're certainly difficult to accept,"  he continued. " It was my mistake because you can't fall when you have more than a 3-second advantage. I can only say that I felt comfortable in the seat. I was trying not to stress the front tire. That's a very long braking point. You can slip up a bit, but I did nothing stupid, and I was absolutely not over the limit. And there weren't even any warning signs in the previous laps. But we're all human."

What makes us ponder is that Crutchlow also fell with his Honda and Lorenzo stopped. Are three coincidences a hint?

"It was not a coincidence," Marc revealed . "We're looking for a slight problem. We're looking and, in Jerez, where there are no bends in first gear, everything should go better. What was it? Let's say it's about electronics.”

And he wouldn't add anything else. Having thrown away 25 points cannot certainly make him happy, and now he's 4th in the championship rankings.

"The good thing is that I'm only 9 points behind Dovizioso, who is first," he said optimistically.  "That's how our sport is. In Argentina, it like seemed I had already won the Championship. Today seems like I lost it. Actually, I'm not worried because I know I'm in a good group. I have everything I need to fight for the championship.”

This time, he was also unlucky because the Honda was damaged in the fall.

"I tried to turn it back on, but I realized that a pedal was broken," Marquez explained. "That's how it goes. Sometimes mistakes happen that you don't expect. The important thing is to accept them and learn. Life goes on."

But sports life is complicated, with Rins also joining the list of opponents.

"Today I was rooting for him, like I did in Argentina for Valentino, for championship reasons,” he smiled. "Alex can certainly fight for the championship. I see him as one of my rivals." 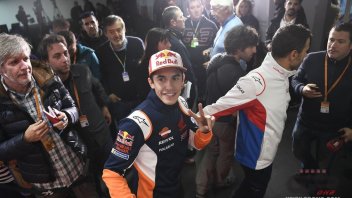 Dorna signed from 2022 to 2026. The Ricardo Tormo circuit will alternate with the others on the Iberian peninsula but will remain the last race of...
1 week 7 hours ago

"When things are not going well, you can feel the weight of the name on your shoulders. My goal for 2020? Improve myself"
2 weeks 19 hours ago