The decision was expected shortly before Assen and has now arrived. Following the extraordinary performance of the Ducati V4 during the first part of the season, albeit only in the hands of Bautista, the FIM has decided to reduce the engine revs of all the latest-generation Panigale bikes, so also those of Chaz Davies, Michael Rinaldi and Eugene Laverty. Rpm was initially 16,350, and is now 16,100 following intervention by the FIM.

We spoke about this already last Sunday, and pointed out that Ducati risked losing 250 rpm, a number that has been confirmed today.

Meanwhile, Honda gets a boost of 500 rpm, results having proved disappointing during the first part of the season. Camier, Kiyonari and Delbianco will therefore see their Fireblades go from 14,550 to 15,050 rpm as of the upcoming round at the TT. We'll see how useful this is for Moriwaki Honda in Holland. Here below is the full table, with values remaining unchanged for BMW, Yamaha and Kawasaki.

An increase or reduction in engine revs can be made by the FIM every three rounds. The next evaluation will therefore be made after Jerez. 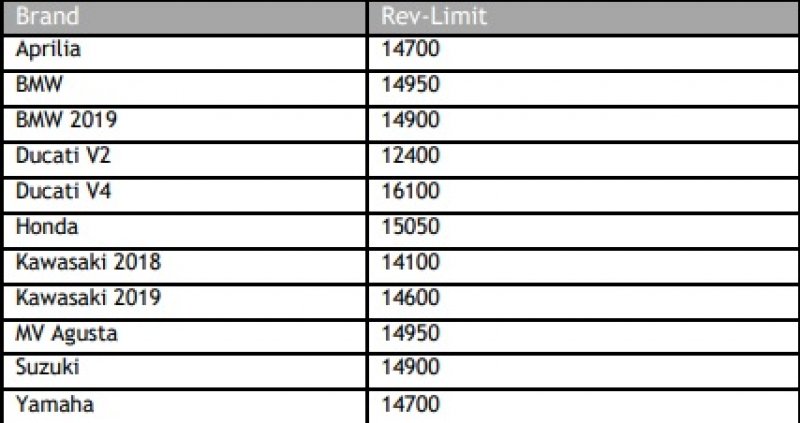 The German test rider will also be on track tomorrow to continue developing the RC213V: "The rain and cold affected our plans."
4 days 11 hours ago

VIDEO. The Japanese team's rider missed the last three GPs of 2019 to solve his physical problems and get to the Sepang tests in the best of shape.
5 days 6 hours ago

Financial problems forced him to reach this decision, despite having signed a contract with the Boe Skull Rider team in September.
1 week 3 hours ago