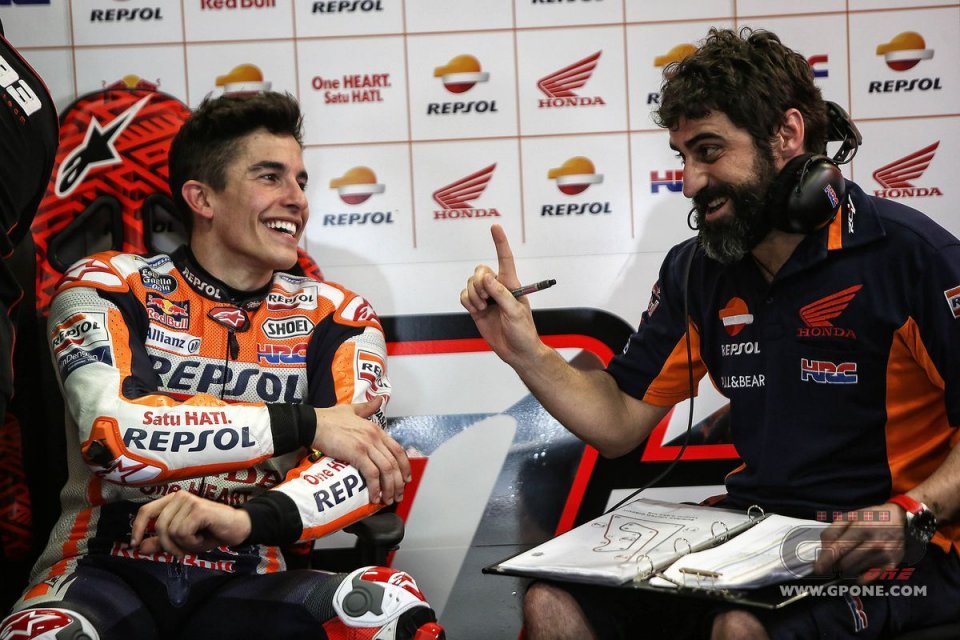 When Marc Márquez gets off his bike and sits in the corner of the Repsol Honda Team garage, the first person he talks to is Santi Hernández.

His track engineer since his time in Moto2 was already a premier class title winner with Álex Crivillé, with whom he worked as a suspension technician. After the spectacular start to the season in Qatar, Hernández reviews the first round of the year and explains how the series has evolved.

Many know you as Marc Márquez’ track engineer, but others may remember you working with Álex Crivillé as a suspension technician. What do you remember about that time? What was it like for a young man in his twenties to work on the Repsol Honda Team?

"I remember Alex Criville with great affection, he made me feel part of the team"

“I remember it with great fondness. As a child, at home bikes were always around me, and to have the opportunity to work for a team like Repsol Honda, with a rider who had always been an idol for me, means that the first feeling and first memory that I have is of being very nervous, like a fan living a dream. I remember it like that.”

The team are celebrating their 25-year anniversary and one of the milestones was the first Spanish 500cc World Champion. What was it like working with Crivillé in 1999?

“I have enjoyed many good moments, but one that I remember as being very positive was working with Álex Crivillé: A great rider and, above all, a great person. I remember how well he treated us, how he worked, and especially how he made you feel part of the group. Being able to be part of that team that opened the way for the rest of the riders in MotoGP makes me feel very proud.”
Do you miss anything from that time? Has the way of working changed?

"At the time of the 500 cc class there was the same rivalry, but fewer interests"

“Yes, it has changed. Everything has evolved. Before there was rivalry, but not so many interests. There was a union of friendship between mechanics, teams and rider, not so much of a rivalry. Nowadays everything has become so professional that the atmosphere is not the same. It was more friendly before, instead of today when everyone is thinking only about the goal, which is to win.”

What do you think has changed more: The championship itself, or the technology and the bikes?

You started working with Marc Márquez in 2011, in Moto2. How would you say he has changed the most? Where could he improve?

"Marc's secret: learn from his mistakes and teach us too"

“Marc surprised me from the first day I was paired with him, because of a comment he made about the bike and how he expressed himself. I always say the same thing: Marc surprises me every day. It’s not up to me to tell him what needs to be improved. He is a rider who is constantly learning and is capable of taking things away from his mistakes. Sometimes I learn more from him than he does from me, and that’s nice too.”

How many times do you speak per week, away from the circuit?

“Normally we talk once a week, but in the team’s WhatsApp group there are messages almost every day. The communication that we have is good and friendly. It’s also good to talk about other things than motorcycles.”

How long has it been since you last saw the start of a race? Is that through superstition or nerves?

“Superstition. It goes back to 1999, when I started working with Álex Crivillé. I don’t know why it happened, but I missed the start and he won the race. So since then I don’t watch the start.”

After the race in Qatar, Marc Márquez said that the Honda’s engine had taken him to second place. In what ways has the new bike improved?

“As Marc said, the new engine has helped us to have a better top speed and better acceleration, which were points where we have struggled most in recent years. We are closer to the Ducati now and we have overtaken other manufacturers, and that is important. It is very interesting, because when you can gain time on a straight, you don’t have to sacrifice so much at other, riskier points of the track. It’s ‘free’ time, because everyone knows how to open the throttle and you don’t have the risk of having to make back time on the brakes. This is one of the big aspects that Honda have improved. We have to congratulate the engineers for the effort they have put in, because there are many people who work behind the scenes and sometimes go without sleep so that we can get the result.”

After the winter and the difficulties Marc had at Sepang, did you expect him to finish second and 23 thousandths off the win?

“Marc already went through a difficult time when he had his accident in 2011, in which he spent a long time out and we didn’t know if he was going to recover from the injury. He surprised everyone by winning the first race in Qatar the following year. I was very cautious when they asked me what level Marc would perform at in the first race but, inside, I didn’t doubt that he could fight for victory. Marc shows us every day that he is a fighter and that he performs in the face of adversity. I knew Marc could have a great race.”

The difference between the Top 5 in Qatar was 0.6 seconds. Do you think the World Championship will be tougher than ever this year?

"This championship was organized to level out the competition"

“Yes. Every year it is more difficult. Every year there are riders with more experience, as well as young talents who have arrived and who are learning fast. Although sometimes you might think it looks easy, winning the World Championship is very difficult, because things are very close. The important thing is to be consistent and know how to play your cards right, without rushing.”

Last year we saw many races that broke records for how close they were. How do you explain how even things are?

“It’s how the championship is set up. Keep in mind that the tyres are the same, and most teams have the same suspensions, brakes and electronics. The regulations have made it so that the difference between the manufacturers is not so big. That also helps us to see a larger group of riders at the front.”

The next race is Argentina, where Marc has always been fast. What is the key to going fast at a circuit like Termas de Río Hondo?

“It’s a circuit that has always been good for us, although sometimes the results have not been there. As at every circuit, you have to keep working and try not to make mistakes. Both Marc and the team have to give our all, and after the warmup we will assess how well we can go. There are races that in theory don’t look favourable for a win, and you have to be able to accept that and not make mistakes. As I said before, you have to be consistent and get the most out of every race.”

The official announcement came today. The rider from Ascoli: "I have no expectations other than to return to a serene and clear climate inside the...
12 hours 49 min ago

This is the first MotoGP pole for Honda since Pol Espargaro at the British GP last year (21 races), ending the longest sequence of successive premier...
17 hours 44 min ago

“We want to thank the entire paddock and especially the Suzuki team that helped us rebuild the garage. We’re ready to start the Japanese GP.”
22 hours 56 min ago