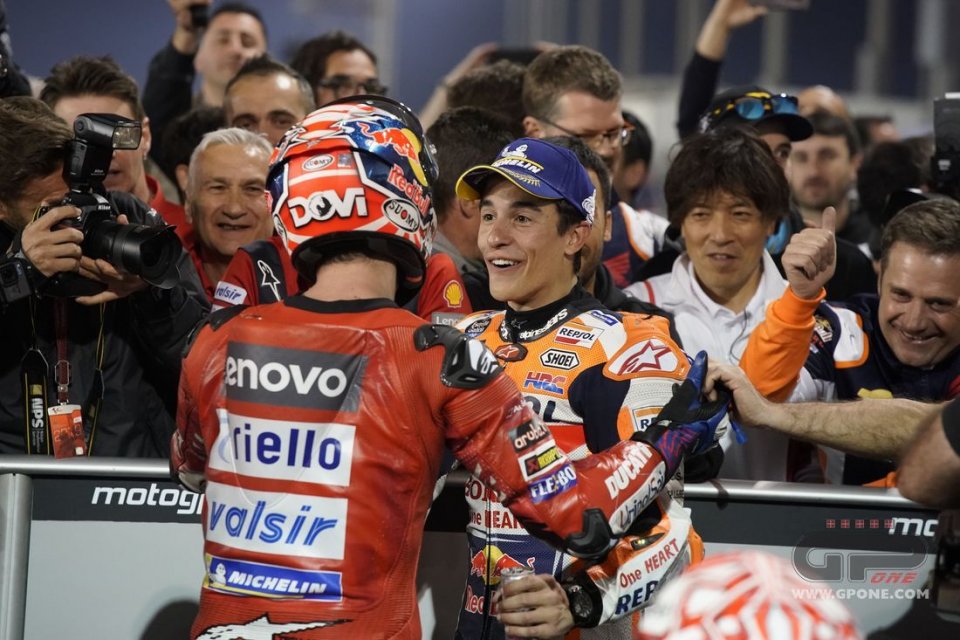 While the Losail track is Ducati's preferred hunting ground, Termas de Rio Hondo plays into the hands of Honda, and particularly Marquez. Of the five editions of the Argentina GP held thus far, the Tokyo based manufacturer has won three, Marc two. In truth, it could have been more, as the world champion made things complicated for himself on a couple of occasions.

Last year it was Crutchlow who celebrated on the top step of the rostrum. Marquez was clearly the quickest on track but he threw it all away, first turning the bike off (and on again) on the grid and then making contact with Rossi. The previous year wasn't much better, with a crash paving the way for a Yamaha 1-2.

Errors aside, Argentina smiles on Marc who is hungry to beat Dovi in light of the Losail result. Marc can also be confident ahead of round three, in Austin, where he is unbeatable.

While riders maintain that the 'real' championship will only kick off at Jerez, it's important to score as many points as possible before that, exploiting any favourable tracks and limiting the damage at the more challenging ones.

Termas is one of those for Ducati, South America having never really smiled on Dovizioso, aside from one podium in 2015. He has been caught up in many accidents, the most talked-about that of 2016 when he was hit by Iannone while battling for second place.

In other words, on paper at least, Andrea starts with a disadvantage, though the Desmosedici appears to be able to perform at all tracks. it might not be enough to score a win, but the Italian should be able to limit the damage.

We've only talked about Marquez and Dovizioso so far because they are the pair who fought for the 2018 title and the first race of 2019, but the grid features a number of other contenders. Starting with the Yamahas, which have also gone well at Termas, Rossi and Vinales having won a race apiece, Valentino three additional podiums.

This is the theory, while in practice it doesn't appear that the M1 has resolved all its problems. Also, if the bike's Achilles heel is rear tyre management, the Argentinian track is one of the worst. Results are desperately needed in the blue garage, because the cold shower of Qatar will have done nothing to boost morale following the high hopes of winter (particularly Maverick).

Another bike to watch out for is the Suzuki, which scored its first podium in Argentina last year with Rins. The GSX-RR is on a par with the fastest bikes and Alex is keen to demonstrate his full potential this season.

Then there's another main player, or rather Cal Cruthlow. The Brit finished third at Losail and won at Termas last year, enough to put him among the favourites this time around.

MotoGP is good at throwing up a surprise when we least expect it, so Marquez and Dovizioso can't afford to lower their guard, with Lorenzo and Petrucci both also keen to throw a spanner in the works.