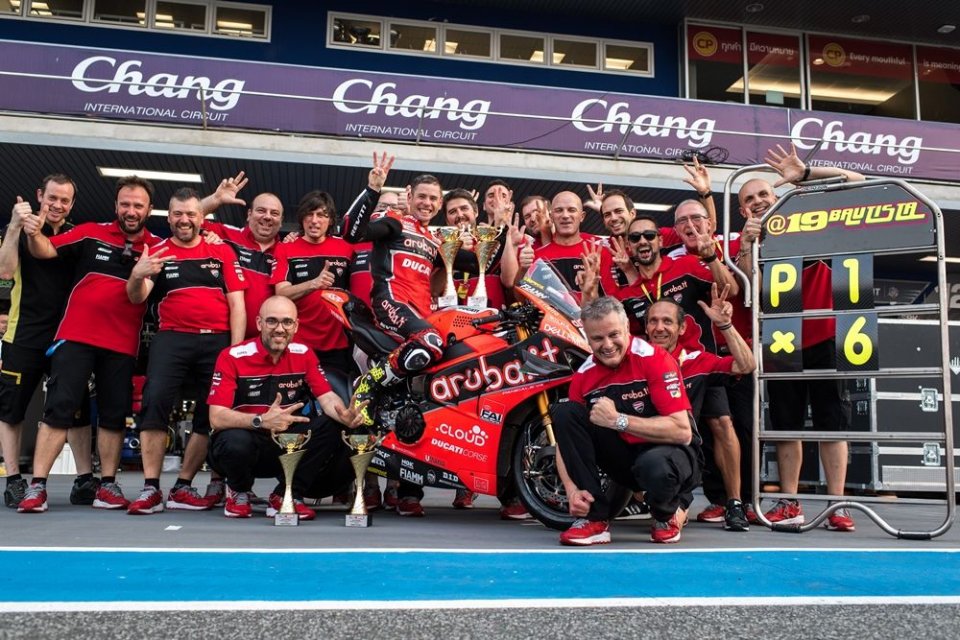 We waited three weeks to see what might change after Phillip Island and now we know: nothing! Yes, you read that correctly, the Buriram round simply serving to confirm the level of the playing field, Alvaro Bautista and the Ducati V4 dominating once more, while Rea and the Kawasaki played chase.

The Spaniard didn't hold back at Chang, scoring full points and leaving his rivals to pick up the crumbs. At this point, we wonder whether anything will change at Aragno, though Marco Melandri for one doesn't think so.

THE GOOD –  “The European fans should learn from the Thai fans. This weekend, you'd see a fan with a red shirt, a yellow one, any colour, but they all support all riders, no exceptions. It's something we've forgotten how to do in Europe”. These, the words of Andrea Dovizioso following last year's Thailand GP and we can only agree with him. Hats off to the local fans for their passion and composure. It would be a real pity of the SBK doesn't come back in 2020.

THE UGLY – We don't want to know what ran through Eugene Laverty's mind, after his Ducati left him without brakes at 200km/h on Saturday, while Sunday saw him unable to start the Superpole Race. We hope he bounces back at Aragon with renewed motivation, though it won't be easy to find.

THE BAD –  Rather than a bike race, Marco Melandri looked more like he was showing off his talents at the rodeo. His R1 was something of a wild horse at Buriram, practically impossible to tame. We hope it is back to being as docile in Spain as it was in Australia.

THE DISAPPOINTMENT – The Chang round was almost a home race for Honda. A pity then that Camier and Kiyonari lost the way. A tough weekend for both Althea Moriwaki riders, Leon forced to wave the white flag after crashing in the Superpole Race.

THE CONFIRMATION – Alvaro Bautista and the Panigale V4 ruled the roost again in Thailand. The weekend could not have gone better for the Spaniard and while he confirms himself as the frontrunner, Johnny Rea is frontrunner among the chasing pack. We're sure the Cannibal is less than happy about this.

THE ERROR – What a pity to see Chaz Davies out of race 1. An uphill climb for the Welshman this weekend and one that finished with the Panigale V4 letting him down.

THE SURPRISE – Look at the race 1, race 2 and Superpole Race standings. You'll notice that the first seven riders are the same each time. Incredible, but true! It was perhaps easier to predict the lottery numbers than a result like this.

THE PASS– Haslam, Melandri, Davies and van der Mark. While there was a lack of action up front, the four behind were having fun, passing and re-passing each other on Sunday. The best pass? You decide.

THE INTERESTING FACT – Maria Herrera and Ratchada Nakcharoensri set a new precedent in the SuperSport race at Buriram. Never before had two women taken part in a 600 race event.

I TOLD YOU SO – Johnny Rea on Friday after practice: “This time I will push 100% and not hold back”. The Cannibal had good intentions, but he hadn't counted on Bautista and his Panigale.