In both of today's sessions, he had to settle for second place, but his face nevertheless displays confidence. Despite being unable to get ahead of Bautista's Ducati, Johnny Rea is sure of his potential at the Buriram track. The feeling is that this weekend won't see him on the defence, the Cannibal set on putting a swift end to the Aruba rider's domination.

“I think we've started on the right foot here at Buriram -  comments the Northern Irish rider– this morning, I was able to be competitive and in the afternoon we took an important step forward with the bike set-up. I wanted to try a race simulation, to see what my pace is like, but in the end I chose to focus on the tyres, with the aim of having a clearer idea for Saturday. Unfortunately I suffered in braking through certain sections last years and I can't overlook this”.

“Alvaro has proved to be very quick and it will be interesting to face him in the race. I had to manage the tyres at Phillip Island, while here at Buriram I can finally push 100%, and not hold back. In today's practices, I was able to check that there's not the same tyre wear we saw three weeks ago”.

Johnny sees the glass half full.

“With the used tyres I can be fast and that's encouraging I think. Perhaps we need to improve through the fast turns, as I don't have the sensation I want yet, but we can think about that tonight as we prepare for tomorrow”.

Rea is already focusing on the race.

“It won't be easy, as it's really hot here. The three races will test us, but it's the same for everyone and little we can do about it. I made a change to the Brembo brakes today, in order to help with cooling. I'd say the Kawasaki base is excellent and I've finally found the sensations I was looking for again”. 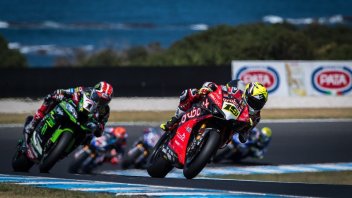 Buriram: Rea and Kawasaki tasked with chasing the Bautista nightmare away

The German test rider will also be on track tomorrow to continue developing the RC213V: "The rain and cold affected our plans."
5 days 14 hours ago

VIDEO. The Japanese team's rider missed the last three GPs of 2019 to solve his physical problems and get to the Sepang tests in the best of shape.
6 days 9 hours ago