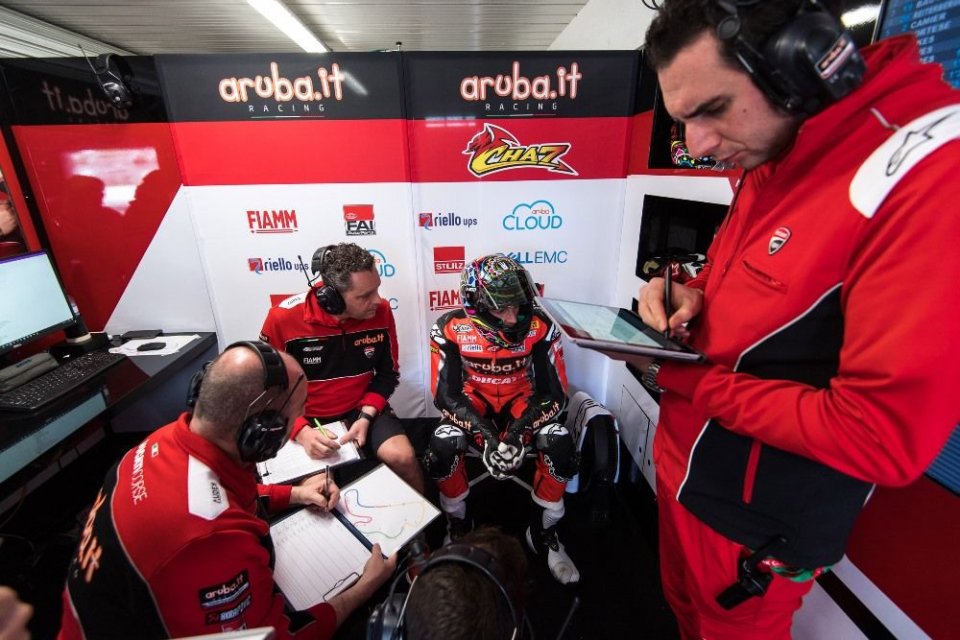 Holding his head high. This is imperative for Chaz Davies during the second round of the Superbike season, taking place under the searing Thai sun. The Welshman needs to turn things around after Phillip Island, a round that saw him suffer in every session while his new team-mate dominated in every sense of the word.

“The first thing to do is improve – begins Chaz - And I'm very motivated to do that. I need to improve my confidence and my riding sensations. I don't think I have any particular advantages here with my riding style but I have been fast in recent seasons and hope to be fast again this time around, improving on what we did at Phillip Island. Confidence with the track isn't enough of course, I have to improve my confidence with the bike”.

#7 doesn't deny that round one wsa followed by a long period of reflection, but he finds a reason to smile

“The flight home from Australia was a long one, too long as as you have time to reflect after a negative weekend. The positive though is that my idea about how to move forward is in line with that of the engineers: at the same time, I have to bear in mind that Phillip Island is a strange circuit, sometimes things that work there work only there. Anyway, I have learned and am continuing to gain knowledge of the bike”.

Chaz goes into more detail, citing where the main changes have been made on his Panigale V4

“We decided to change the bike's power delivery, working on the engine's electronic control. For race 2 in Australia we made big changes and got some good feedback and very different sensations. Also the frame, we changed various aspects for that race, and have decided to continue on that path for these races too. I think it's a good move, but we'll know for sure on Saturday”.

Something that doesn't help Chaz, with respect to Bautista, is his weight, a little like fellow Ducati rider Danilo Petrucci compared to Dovizioso in MotoGP

“my situation may be even more difficult. Dovizioso isn't talk but he's muscular and heavier than Bautista, who has a body type more similar to Melandri. I've seen the differences in the data but it's easy to blame weight, which I can't do much about even if I train. We need to focus instead on finding a compromise by working on bike set-up”.

In conclusion, Davies is optimistic about this next phase of the season.

“I need to find personal confidence with the bike. It has great potential and Alvaro has shown this, I need to find a way to exploit it. This means I need to find a combination of things. I cannot speak for others, but my potential is definitely greater than what we saw in Australia, I just need to find the right way after a complicated winter”.

VIDEO - The two brothers will wear special graphics to show their solidarity at this time. Helmets, gloves and boots will then be auctioned off for...
14 hours 15 min ago

The Dutchman: "In the afternoon I had some problems with front end confidence"; Razgatlioglu: "Too many things to try confused me; my head is...
1 day 1 hour ago

The Circuit of the Americas has made it official: no US race for this year
1 day 4 hours ago

The young rider was transferred to a ward at the Meyer hospital in Florence. She fractured her pelvis at Mugello during the first CIV test but will...
2 days 13 hours ago

Upon authorization, highly skilled sportsmen and workers will be allowed to cross borders
3 days 9 hours ago