Alvaro Bautista, him again! The Buriram weekend is in the Spaniard's hands for now, the Aruba rider having set the quickest time in both the morning and afternoon free practice sessions. The Spanish rider was able to put on a record performance, stopping the clock on 1’32”971 in FP2, despite temperatures of close to 40°C, the only rider to duck under 1’33”. We can only say hats off to him!

The Borgo Panigale rider couldn't have asked for more, the star of Friday's track action. Rea on the Kawasaki came in three tenths behind him (+0.298), only confirming the potential of the red bike, particularly through the central section of the track. Let's not get carried away yet though, as Alvaro used the new compound brought by Pirelli during the afternoon session, which is very close to the qualifying tyre, while Johnny set his time on a race tyre.

The #19 Panigale appears to be in a class of its own, especially if we consider that #7 is more than a second off the pace (+1.122). An uphill climb for Chaz Davies, who continues to seek the right confidence with the Ducati, closing outside of the top ten today. Things went slightly better for Panigale rider Eugene Laverty (+0.928), eighth ahead of Leon Camier on the Honda (+0.976). A step forward for the British Moriwaki rider, who finishes ahead of Tom Sykes on the BMW.

Back to the top of the timesheets and its good news for Yamaha, and Sandro Cortese who rides the R1 into third place ahead of Loews and van der Mark on the factory machines. Then comes Marco Melandri, sixth but more than six tenths back. The Italian closes ahead of Haslam, who is struggling to find the right path with his Kawasaki. 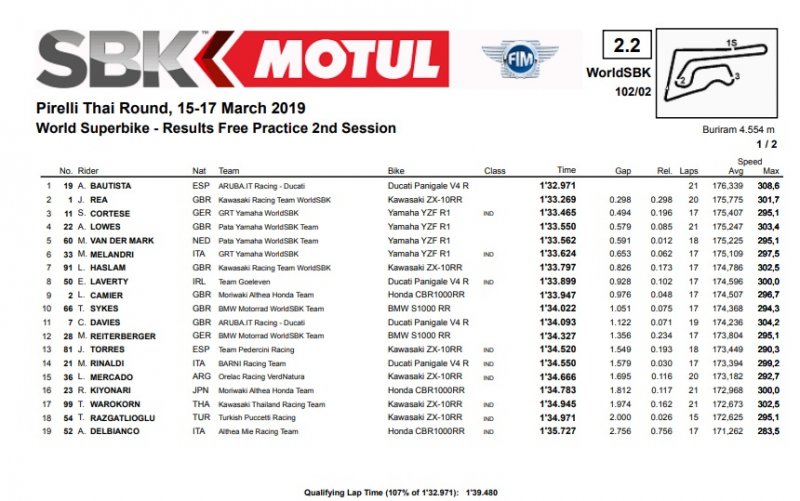