A 5th place on Sunday is the worst result ever achieved for Valentino in the Qatar Grand Prix with Yamaha, equaling the one in 2008. Eleven years ago, however, Lorenzo was on the podium, so we can say that Yamaha has never started a season this badly.

You can't even find something positive in a gap of just 6 tenths of a second from the winner scored by Rossi, since they are simply the offspring of a race in slow motion because of the almost totality of his distance. Starting from the 14th position, the Doctor was the star of a comeback that was the result of his experience and skills but, despite the small gap, the podium was always a delusion for him.

He put himself in the right position, ready to take advantage of the slightest error of his opponents, but he never showed the strength to be able to attack or to have a card up his sleeve. It's not criticism towards the rider, but rather towards the M1.

So, looking at it from another perspective, Valentino's defeat on the track looks pretty damn like a victory inside the pit.

Because Vinales had spent the winter making sure that he had "the best M1 he ever rode" in his hands and that "finally, Yamaha understood what my driving style needed". He also seemed to be right, with convincing race simulations in the tests and a pole position on Saturday. 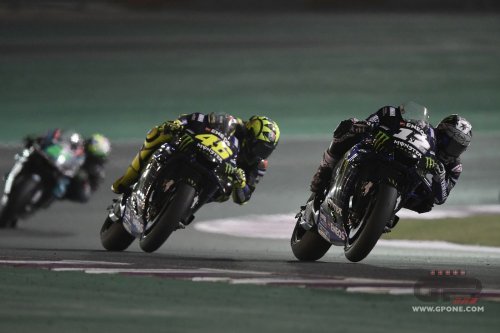 Rossi, on the other hand, played the role of Cassandra: "I really hope Maverick is right, and I'm wrong." It's difficult to think that a rider with 23 seasons of World Championships behind him can mess up and, in the end, the results confirmed the Doctor's theory.

Vinales went his way, praising the new engine and using a chassis that is different (even if not very different) from that of all other Yamaha riders. In the race, however, he was shipwrecked, with a 7th place that, misery loves company, is also the worst result in Losail on the M1 for him.

Not that the other riders did any better: Morbidelli didn't do better than an 11th place, coming behind Aprilia with a gap of almost 10 seconds from the winner; Quartararo saw his race compromised in the bud after stalling on the grid, and having scored the fastest lap of the race doesn't count for much.

In the best of cases, it was a false start for Yamaha, and now he'll have to rely on Valentino to recuperate. The same who warned: "we can't recuperate our gap in 3 months. It'll take at least a year." Provided you continue to commit yourself and follow the right indications.

Vinales would have wanted the role of helmsman for himself, but after what happened in Qatar, it'll be difficult for him to convince the engineers to entrust him with that role. On the contrary, it was the Doctor's actions that gave him that captain's armband he proved to  deserve, and not only due to seniority. Because the rules are very simple: tests and qualifications are worth little or nothing, while those who arrive in front of the race are those who decide.

Right now it's Rossi who has returned to a strong position because all his predictions have come true. "We're in the same situation like we were a year ago," was his sentence Sunday evening, and there is little to be happy about remembering how 2018 went.

From what we have seen, at best, it will take a few months to start smiling, again. As long as the right path is followed, and now it seems easy to guess who will point it out.

In a video on You Tube, the driver defended his reasons but confirms the end of his experience with Audi in the Formula E
1 day 20 hours ago

It was decided by the Board of Directors via video conference call. Previously the FIM-Dorna contract provided for a minimum of 13 Grand Prix. In F.1...
3 days 13 hours ago

An embarrassing moment for Audi Formula E driver Daniel Abt who, during the virtual race in Berlin, had an eSports professional race in his place:...
4 days 7 hours ago

Rainey: "With the way things are in California right now, there is no way we can race with spectators at Laguna Seca in July ". The series is set to...
6 days 16 hours ago