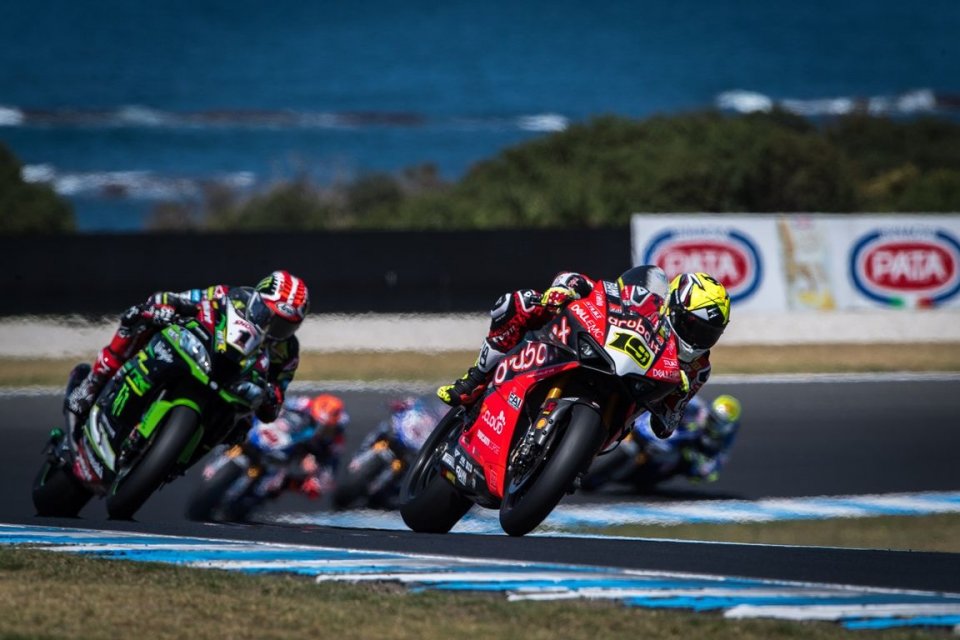 It should be an incandescent weekend, not only for the on-track action but also for the temperatures, close to 40° degrees. Yes, because Buriram is set to the hottest event on the calendar and, consequently, everyone is keen to see the level of the playing field following Phillip Island. With many considering it the true 'first round', Thailand will provide clues ahead of the Superbikes' arrival in Europe in April.

The Australian round immediately highlighted a two-sided Ducati. While Alvaro Bautista shone, leaving his rivals with nothing but crumbs, Davies, Rinaldi and Laverty struggled to find the right path. Their performance took a backseat in fact, the spotlight firmly on the Spaniard's Panigale V4, a winner on its debut appearance.

Rather than the triple win, what was impressive was the margin by which Bautista triumphed. No-one could have imagined seeing Johnny Rea and his Kawasaki so far back, almost twenty seconds back in race 2 in fact. At this point we cannot help but wonder what will happen at Buriram. We definitely expect Kawasaki to respond, though the Cannibal has already pointed out that there is a risk of a similar situation arising again.

As you know, the Asian track is characterised by three long straights, where the Panigale V4 can really showcase its horsepower. But there are also flowing sections. Comparing Buriram to the Red Bull Ring would be a big mistake, as Andrea Dovizioso already stated last October. Yes, because through the mixed sectors, Bautista will have chance to show off his agility on board the red bike, the project inspired by that of the MotoGP.

The real risk is that Rea will find himself on the defensive once again, also having to keep an eye on team-mate Leon Haslam. Let's just say Johnny is aware of the dangers!

There are high hopes in the Honda camp too, in that back in January the team chose to test its Fireblade SP2 at the Asian track rather than in Europe. And we shouldn't forget BMW, still dealing with a Stock engine. In Australia, Tom Sykes was 20 km/h slower than the Panigale V4. #66 will be well aware of this number, despite the positives of the bike's frame.

And what of Yamaha, the privateer team having stolen the factory outfit's thunder three weeks ago with Marco Melandri, who scored a first SBK podium for team GRT. The Italian now faces the toughest, but most exciting of challenges: to consolidate that performance.

The Yamaha rider is at 51 wins in the stars and stripes top class. Nothing doing for his opponents. Jake Gagne, Mathew Scholtz, and Bobby Fong also...
9 hours 13 min ago

Thanks to the retirement of the leader of the classification Glenn Irwin in Race 2, the championship now sees four riders enclosed in only 12 points...
1 day 8 hours ago

Our popular “Frankie” confessed to being a victim of the degenerative disease, but he hasn’t given up: “The human body is like a motorcycle, if it...
2 days 5 hours ago

At Oulton Park the Australian took his second career victory. Nothing doing for Iddon, after leading the race for a long time. 5th championship...
2 days 9 hours ago

Jack: "I set my time thanks to Rossi and Bagnaia. Everyone will have tyre management in a corner of their brains". Fabio: "I'll try not to make a...
2 days 19 hours ago

Dominique Aegerter took his second win of the season overtaking the man from Rimini on the last lap, Ferrari finished in third place for having gone...
3 days 36 min ago

“I tried to get more grip on the rear and didn’t succeed. It’s useless to waste time. I’ll focus on the front to brake like Ducati, Honda, and Suzuki...
3 days 10 hours ago