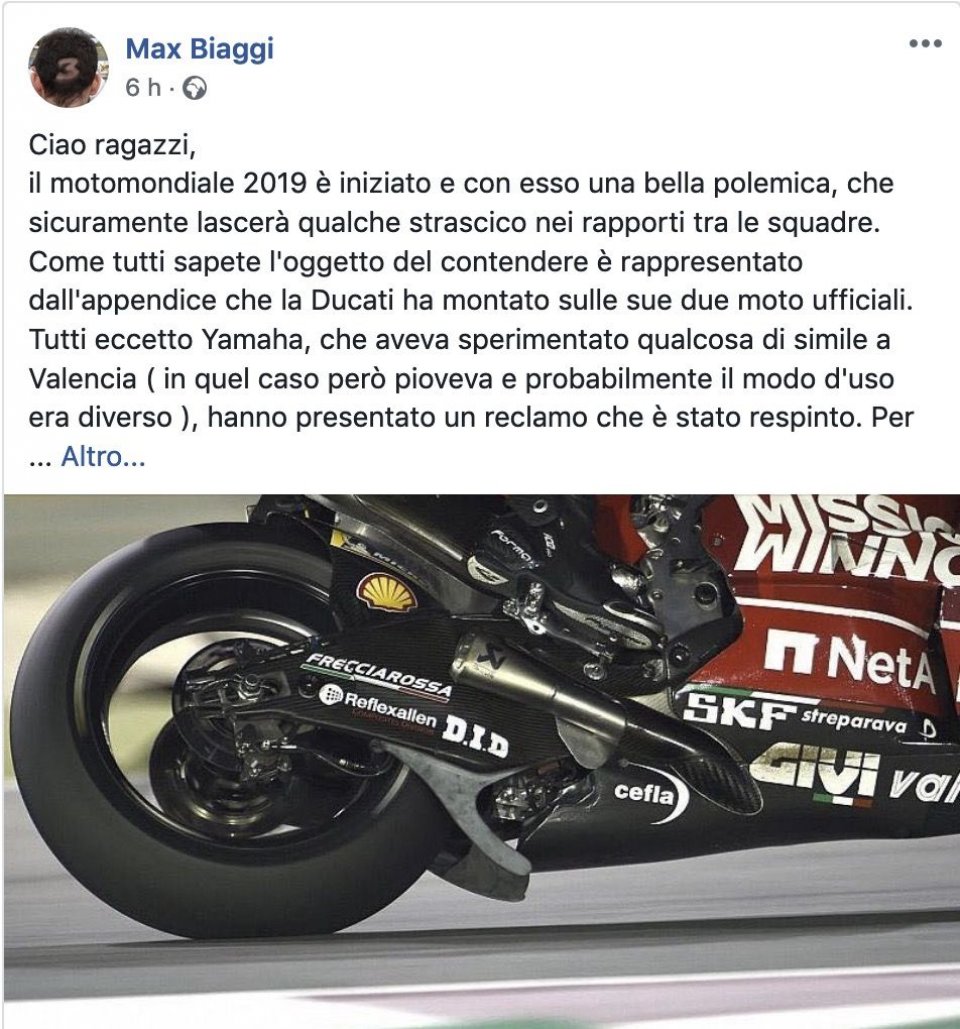 The Ducati case has incited columnists, but also simple fans. When talking to a rider of likes  of Max Biaggi, however, we must read his words carefully. This is what the Corsair wrote on his Facebook profile.

The 2019 World Championship has begun and, with it, a nice controversy, which will surely leave some remnants in the relationships between the teams. As you all know, the object of the dispute is represented by the appendage that Ducati mounted on its two official bikes.

All, except Yamaha - who had experienced something similar in Valencia (but, in that case, it was raining and probably the way it was used was different) - presented a complaint that was rejected. For this reason, an appeal was made by the same teams, for which the FIM Court of Appeals will rule in these days.

The problem is that aerodynamic developments always create regulatory disputes, since the limit between what is lawful and what is not is very subtle. In Formula 1, we see  how the "aerodynamicists"' of the various teams are always looking for regulatory quibbles, in order to develop new ideas, through which they generate an advantage for their team.

The world of MotoGP has evolved a great deal in recent years with regards to aerodynamics! Just think of the problems that Iannone and Bagnaia have had.  In fact, during the first frantic laps, contact between various riders made them lose some of their winglets.  When they returned to their pits, both had reported a bike that had obvious dynamic problems.

All this was unthinkable until recently! This episode represents another answer to thousands of doubts, which animated the discussions among enthusiasts on the usefulness of the aerodynamic appendages. The aerodynamic packages developed by the houses work and change the dynamics of the bike consistently, similar to what happens on cars.

The best way to limit the escalation of the costs related to aerodynamic studies is to quickly adapt the regulations, in order to decide, immediately and with extreme clarity, what is lawful and what is not!

Formula 1 can teach us a lot in this field, so they should take a cue from this. What do you all think about all this? Would you impede all aerodynamic appendages, or are you in favor of a regulated development of aerodynamics on motorcycles?

Personally, I believe that, with the high power involved, you can no longer do without winglets, so that the front wheel can more easily maintain contact with the asphalt. The winglets represent an advantage in terms of safety and performance. I also believe that there must be a clear  regulation, in order to prevent regulatory debates and an escalation in costs.

What do you think?  Tell us HERE.

Quartararo admits he was always at the limit: “There will be no room to be on...