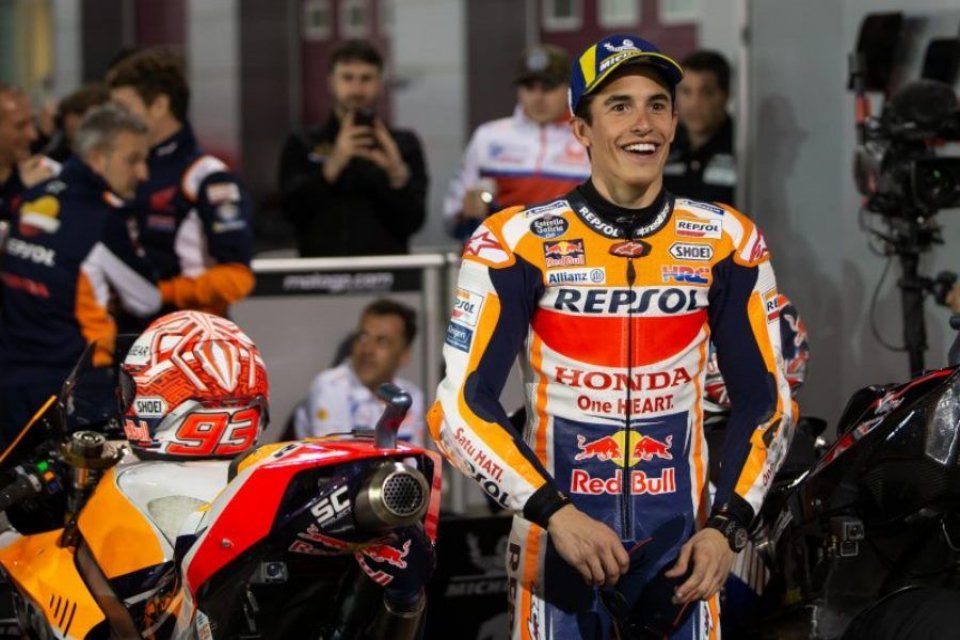 Mission accomplished! Marc Marquez's objective was to bring his Honda to the front row in Losail, and, in the end, n.93 didn't miss out on this. At the last available lap, taking advantage of Petrucci's trail, the Spaniard managed to find the momento to climb the rankings by hooking up to the third place.

"This is the MotoGP. Sometimes it happens that others follow me, while this time I was the one who followed a rider," he clarified. "So, welcome to the official riders club, Danilo. Like I said, we're in the MotoGP here and not in a rally, where there's no trail. The fact is that when others do it with me it's normal. When it's me, it's not right " (he smiles).

Marc's Saturday was immediately an uphill climb when he fell in the third practice session.

"This morning I ended up on the ground because of my own mistake. Maybe I pushed too hard and, thanks to the wind, I came out of an ideal trajectory and fell."

Despite the difficulties, can we consider this second day a positive one?

"Today I collected lots of  falls, but I can say I feel 100% ok," continued the Spaniard . "I don't know if Losail is the worst track for Honda, but it's definitely the most complicated. Among other things, the wind conditioned everything, It wasn’t easy to manage the various situations. Today it was really very cold and the track was slippery during the qualifications, especially in the left turns."

On a physical level, what are your feelings?

"I definitely have less strength than usual. In fact, I don't try to push to remain clinging to the bike. Besides that, I can say I've worked well, and I expect to be with the best in the race."

As for the tires?

"At the moment, the rear is a question. We must also evaluate the front. Certainly, the hard tire behaved well and even the medium isn't bad."

Among the surprises on Saturday, Quartararo stands out.

"I followed Fabio with interest, since the days of the CEV. I must say that he has a great talent. I'm surprised by his performance, and I'm convinced that it'll be interesting to compete with him on the track."

After Friday's tests, are you surprised not to be in front?

"In the first part of the qualifications, the tires were not ready yet, so I was cautious, avoiding mistakes. I then tried to attack, pushing especially in the final. Besides that, I can say that on the race pace, Dovi and Maverick have proven to be quick, and I'm sure that they'll be fighting for the victory."

Why does Honda struggles so much in Losail?

"Honestly I don't know. Like Dovi said, this is a very special track. With Honda, I feel strong in Jerez, but here the situation is different. It would be interesting to talk about it with Jorge, since he has ridden other bikes in the past."

MotoAmerica and AMA have given the green light to the RS 660 model to compete in the Twins Cup starting next season in compliance with the...
2 days 1 hour ago

For 2021, Herrera will take part in the WorldSSP Challenge, featuring at the European stages of the championship, which currently make up the first...
2 days 5 hours ago

Friday, February 27th, at 6 pm, live streaming on the team’s social media channels, but also on GPOne, Facebook, and YouTube: presentation of the...
3 days 4 hours ago

Moriwaki won the inaugural Moto2 world championship with Toni Elias: "Toni won riding the MD600, one of the best achievements in Moriwaki's history,...
4 days 4 hours ago

The Indonesian track is one of the reserves on the MotoGP calendar: “It recently flooded, but our drainage system worked.”
5 days 54 min ago

The 2018 Supersport 300 champion was injured last September after a crash in Estoril: "Five months seemed like five years"
5 days 1 hour ago