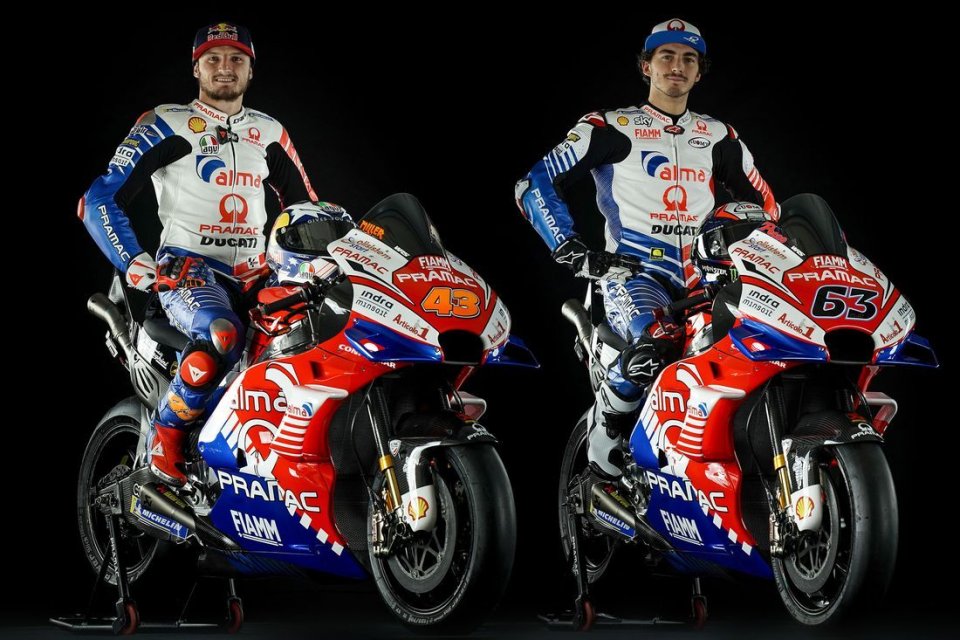 Ducati and Lamborghini come together on the fairings of the Desmosedici that team Pramac brings to the track. The Italian team has unveiled its new livery, created by the car manufacturer's style centre. Designers from Sant'Agata Bolognese previously worked on the Pramac Ducatis for last year's Mugello GP and now the collaboration continues for the 2019 season.

Red, blue, white and black alternate on the fairings of Pecco Bagnaia and Jack Miller's D16 bikes, with special graphics that definitely make an impact.

"I wanted to combine Lamborghini DNA with the passion I see in this team - explained style centre manager Mitja Borket - This livery is characterised by a central Y, a form used for the shape of the lights on history cars such as the Miura. My aim was to bring dynamism to the livery".

The team was presented at the Sky studios and the two riders talked about the winter tests together with Guido Meda.

"The winter exceeded my expectations - commented Bagnaia - I started out with a MotoGP mentality, trying to understand as much as possible. I was competitive in Malaysia, particularly over the flying lap, then in Qatar I focused more on pace and in the end I'm pleased with how the last test has gone".

Pecco, a rookie, is dealing with the step up the reigning class.

"The weight is similar to that of the Moto2 but the power doubles, at least. It's all incredible, but I immediately got on well, the Ducati is straight-forward and this is important for a rookie".

Jack Miller is also pleased with how pre-season testing has gone, the Australian benefiting from a factory bike this season.

"It's been a good winter, but now for the difficult part - smiles the Australian - I made good progress in terms of race pace, especially in Qatar and so I'm pleased. There are many differences between the 2017 Desmosedici, that I was riding last year, and the new bike: from the outside they look similar but the riding sensations are very different, in a positive sense. The GP19 has incredible acceleration and allows the Michelins to work well. It's nice to be the team's first rider, but with a rookie like Bagnaia I need to be fast right away. I think Pecco can be rookie of the year despite some stiff competition, it will be a well balanced championship".

The Ducati Pramac bikes will take to the track in their new colours next week when, come Friday, the opening practice sessions of the Qatar GP will get underway. Pecco Bagnaia will be riding a Desmosedici GP18 this year, last year's version, while Jack Miller will race with a GP19, very similar to the bikes of the two factory riders Dovizioso and Petrucci.