A day that goes down in history. It was his first Superbike race aboard a bike that had never raced in the world championship until today. There were some question marks, but he was able to clear them all up in one fell swoop. 23 February 2019 is not a date that Alvaro Bautista and Ducati will easily forget, and neither will the ducatista, the Spaniard having given them a gift that will remain in their hearts.

He had already proved his potential with the V4 during testing, after which he consolidated that performance during Friday's free practice. He then qualified in third position. In Race 1, the Aruba rider proved indomitable, immediately passing Rea to take the race lead. And from there there was just no stopping him.

While the competition struggled to duck under 1’31, Bautista consistently lapped in the 1'30s, gaining half a second per lap and running what quickly turned into a solitary race: “I couldn't have asked for a better race, I'm really happy with how it went. A pity about the Superpole, I have to learn how to make the mot of the qualifying tyre but in the race I knew I had good pace and was confident. I knew I needed to control the tyres in the final stages and it all went to plan.”

Alvaro's debut win is one of those feats that riders such as Biaggi, Takeda and Kocinski have achieved in the pass. The Spaniard crossed the line almost 15 seconds ahead of Johnny Rea on the Kawasaki, forced to play the part of spectator today. The four-time champion had to deal with his team-mate Leon Haslam too, a thorn in his side until the Englishman crashed out ten laps from the end. With Leon no longer a threat, the Cannibal was under less pressure, but nevertheless had to settle for second place: “Congratulations to Alvaro, he did something really exceptional, Unfortunately I couldn't match his pace”.

The battle for third place was won by an impressive Marco Melandri. Hats off to the GRT rider for his race 1 performance, the Italian just beating Alex Lowes to the line “At first I was struggling with the fresh tyres, but then I was able to get into a rhythm and found good feeling. This podium is the result of team work. I knew I had a little more than Lowes at the last turn”. Melandri put both the Englishman and van der Mark behind him, while Tom Sykes settled for seventh place.

It turned out to be a complicated Saturday for the Aruba camp on Chaz Davies's side. Having started from the last row, the Welshman was forced to play catch-up, reaching tenth place behind the Panigale V4 of Michael Rinaldi. Leon Camier suffered a crash with the Honda. 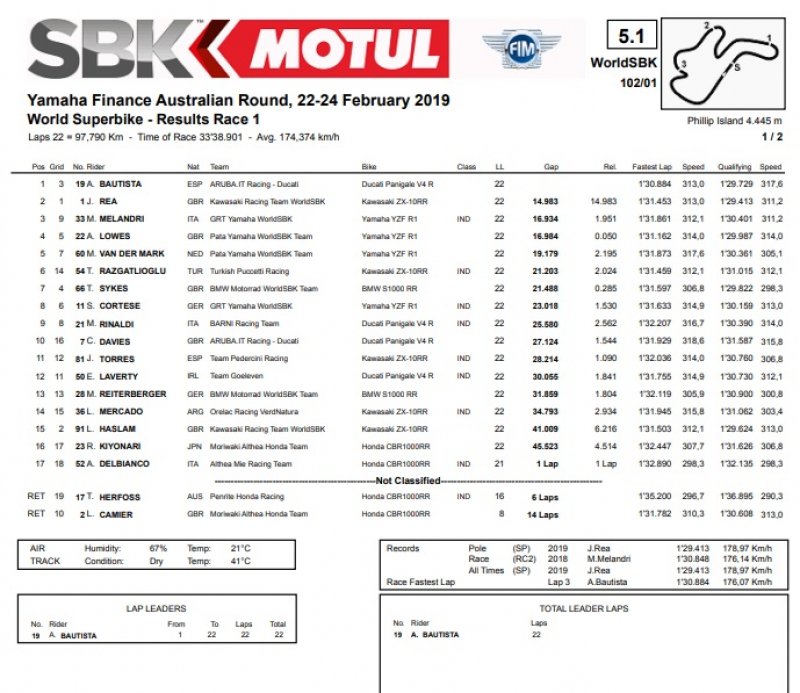 The German test rider will also be on track tomorrow to continue developing the RC213V: "The rain and cold affected our plans."
16 hours 38 min ago