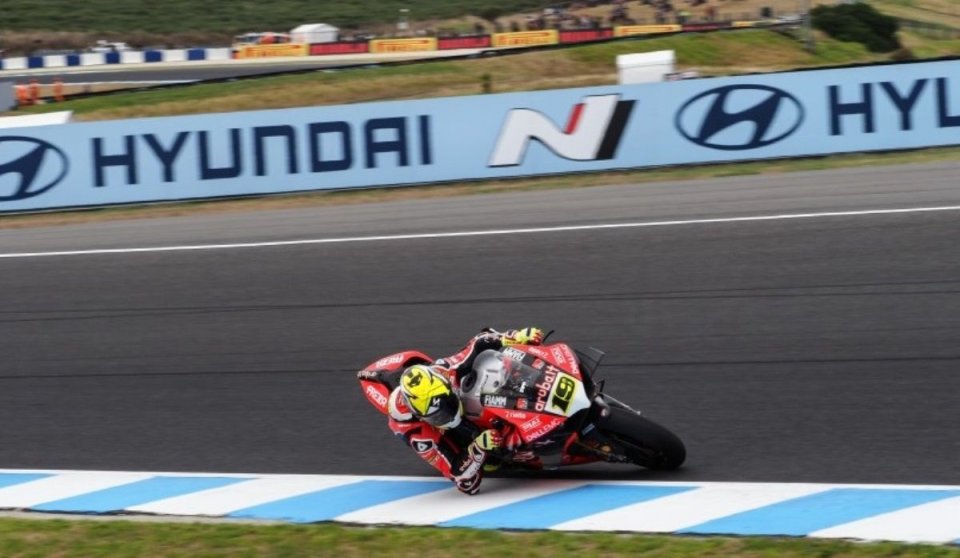 It turned out to be a close-run thing between Johnny Rea and Alvaro Bautista today. While the Kawasaki rider closed ahead of the Ducati man in the morning, the afternoon session saw the Spaniard answer back. The Aruba rider set the fastest time of the session, with a 1’30”327, which meant he closed 0.014 of a second ahead of the four-time world champion.

The weekend couldn't have got off to a better start for the Spaniard, who is proving to be a thorn in the Cannibal's side. Compared to the Ducati rider, Rea appears to have a little extra through the central section of the track, where he is two tenths quicker in fact, but the Panigale is superior through the final section. From what we've seen so far, it's looking to be an exciting battle between the pair.

Another rider hoping to be in with a chance of a first-place finish is Leon Haslam, who improved on his best time set in FP1, closing just one and a half tenths from the front. Alex Lowes (+0.456) also took a step forward, rounding out day one in fifth place. And then what about the Honda that, in the hands of Leon Camier now lies less than half a second from the front (+0.465). The top ten also features Toprak Razgatlioglu, who was able to get the better of Jordi Torres in the final stages.

It was an uphill climb for Marco Melandri today, the Italian forced to settle for thirteenth place (+0.932) behind Rinaldi. The GRT rider improved on his FP1 time by a few tenths, but he is still around a second off the pace. Meanwhile Chaz Davies continues to seek the right confidence with the Panigale V4 and closes day one in fourteenth place behind the Ducati of team Barni.