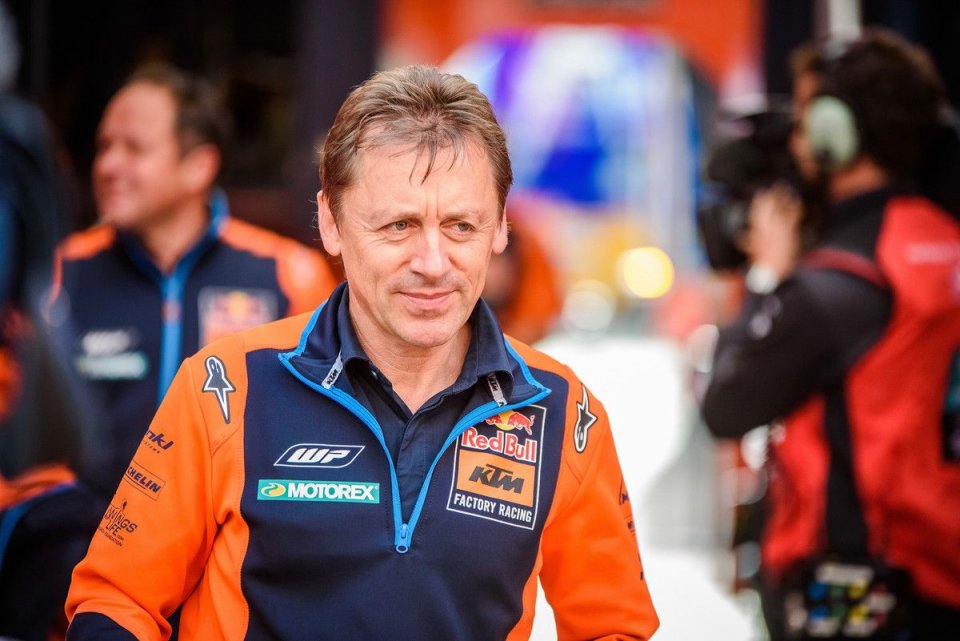 Though the fairings of the bike unveiled in Mattighofen looked smooth, KTM did test some new aerodynamic elements during the Sepang test. For the Austrian manufacturer, this was more of an obligation rather than a choice. Company bosses have previously stated that they would prefer to see winglets removed from fairings, a concept that was raised once again today, during the team presentation, by team manager Mike Leitner.

“We've seen what happened in Formula 1, but these are the rules now and we need to obtain the max while following them”, he states.

Aprilia has proposed reducing the electronics, does KTM agree?
“We already have a single ECU and inertial platform, and that's OK. If we're talking about the show, what MotoGP offers today is similar to many years ago, but the costs have increased. In Formula 1 they complain about aerodynamics because it prevents passing, our riders too have talked about turbulence along the straight when they're following other bikes. In my opinion, this isn't going in a direction of greater safety, it's the wrong approach for the future but we must accept the regulation”.

Over the winter, you have gained some technicians, from Ducati and Aprilia for starters…
“They have our rider (he laughs, referring to Smith). In this regard, we're not 100% yet, just consider how many years other manufacturers have been working to define their structure”.

Your team is like the Tower of Babel in terms of the number of languages you all speak…
“It's challenging to manage, but KTM has staff from different nations in its production department too. In the team, we have people from 11 different countries but it's no problem at all, because what counts is their mentality and skills, not the language they speak ”.

Where are you focusing right now in order to improve the RC16?
“There is no one area where we are particularly losing out, so we're working to improve all the components, the engine, frame, electronics and aerodynamics”.

What are the riders asking?
“All riders want the same things: more traction, greater power, better braking and more speed through the turns (he laughs). If we compare the times through the various sectors of the Sepang track, there is no one area where we suffer more, but we are losing in the same way through each”.

What role might Pedrosa play as test rider, considering his wealth of Honda experience?
“Dani will be of great help to us, I'm sure. He knows how a bike should work, it's not a question of Honda or Yamaha, each has its own philosophy and the important thing is to understand what we are missing in order to take that next step forward”.

The young rider was transferred to a ward at the Meyer hospital in Florence. She fractured her pelvis at Mugello during the first CIV test but will...
1 day 3 hours ago

Upon authorization, highly skilled sportsmen and workers will be allowed to cross borders
1 day 23 hours ago