Everyone knows that Dovizioso can be more realistic than the king, and not even four Ducatis in front of everyone at Sepang (and with record times)  manage to discourage him much. This doesn’t mean that he’s not happy or satisfied, but his experience tells him that certain results must be taken with a grain of salt.

It must be said, however, that the Malaysian tests gave him security and tranquility, and the future is now brighter. However, this isn’t enough, and only the races will show us what the balance of power will really be in 2019.

Andrea, was it the Ducati's domain?
“The standings confirm our potential, and I’m pleased to see four Ducatis in front of everyone. It’s proof that our foundation is very good and that we’re working well.  What we did in the second half of 2018 is making us start out better this season. But, in my opinion, it doesn’t reflect the actual merit on the track. If we were to race tomorrow, the results would be different. We wouldn’t be the fastest.”

What is your opinion on these three days?
“I expect our opponents to be more competitive, but, at the moment,  understanding the general level isn’t possible.  The Honda riders aren’t in top form. It’s impossible to judge. Yamaha took a step forward. Vinales demonstrated this today, going very fast in his race simulation, and even Rins is doing very well. Being the first test of the year, we can’t analyze the times the way we do after a race weekend. The important thing was to try the new material and get an understanding of it.”

Did you succeed?
“We managed to try everything and even improve a bit. This makes me go back home happy. It’s normal that, when you start from a good foundation, it’s more difficult to progress, but we did it by using parts that I did not expect would have those effects. We had pieces that we were not able to try out due to a lack of time during the race weekends, and they proved to be better. So I’m satisfied, but I know it’s not enough, yet.”

Has the weak point of the Desmosedici remained the same?
“The main problem remains in how it behaves in mid-corner.  I’m aware that we can never go as fast as our opponents because our bike has certain types of characteristics, but we have to improve.”

The chassis and fairing were the big news. What conclusions did you come to?
“The new chassis is not bad, but it needs to be studied some more. We’ll decide which one to choose in Qatar. I liked the fairing. I’m glad.”

Are all those fast Ducati riders a problem or an advantage?
“Bring them on! It pleases me to see that all the Ducati riders are very competitive. I think we’re in a great situation. Danilo and I will be able to achieve excellent results, and the Pramac team is perfect with a rookie like Pecco and a talented driver like Miller with two competitive bikes.”

Did Petrucci surprise you?
"The truth is that we are all surprised of our times, but this was due to the fact that it hadn’t rained for three days, and the track improved a lot.  I'm not surprised by Danilo’s time because he had demonstrated that he was quick here in past years, as well. Simply, during this test, he understood which points needed work on for the race, and this is what he needed most. I repeat, Danilo has more potential than most people think.”

Even Bagnaia was very fast. The Ducati no longer frightens anyone, not even beginners?
“First of all, we make the mistake of making a comparison with the Desmosedici from years back, which was not as competitive as it is now. When Lorenzo arrived, he found a much more competitive one than I had found, for example. In recent years, we have managed to create a better foundation. We don’t have any specific problems, so it’s normal for everyone to work at their best, a bit like what has always happened with Yamaha.”

Now it’s an easy bike, so to speak?
“Perhaps our bike is easier than others at the beginning because of how the engine and the electronics are handle and because of its balance. But it’s easier to ride a lap with new tires than to keep a good pace because the bike changes a lot. During a race, at least in the beginning, it’s not easy to keep good times because we need to study and work a lot to be competitive.”

Is this why you don’t trust the standings much from these days?
"The test times have counted for very little in the last few years because they’re all fast, from the first to the seventeenth. And only a few can be fast for 20 laps.”

Next week, Rossi will turn 40...
“I’m very pleased that Valentino continues to race and, above all, remains so competitive. It’s obvious that races without him will be different. So, I’m also very pleased to live this moment and see a rider with so much passion who constantly pushes himself to the limit at his age. I don’t think anyone would have ever expected it. Hats off to him!” 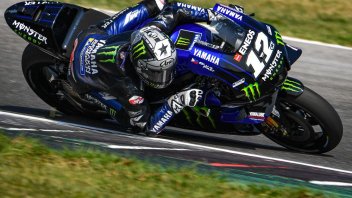 Vinales fast but not happy: "The new parts? Nothing much changes"

It was decided by the Board of Directors via video conference call. Previously the FIM-Dorna contract provided for a minimum of 13 Grand Prix. In F.1...
17 hours 28 min ago

An embarrassing moment for Audi Formula E driver Daniel Abt who, during the virtual race in Berlin, had an eSports professional race in his place:...
1 day 11 hours ago

Rainey: "With the way things are in California right now, there is no way we can race with spectators at Laguna Seca in July ". The series is set to...
3 days 20 hours ago

The round scheduled for the Circuito do Estoril from the 4th-5th July would go ahead as planned and become the season opener, to be followed by the...
1 week 32 min ago