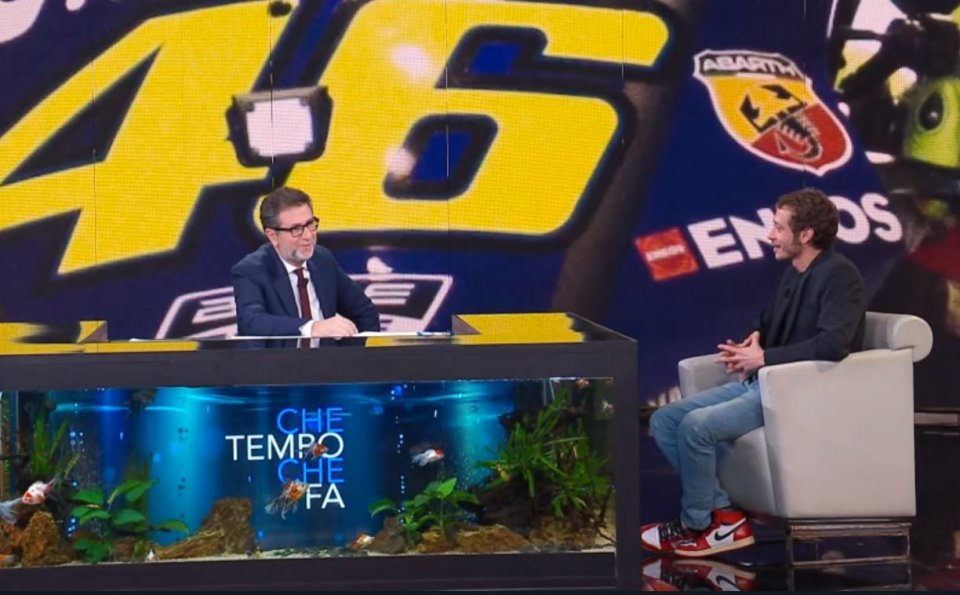 He was one of the most highly anticipated guests on Italian show “Che Tempo che fa”. Ten years later, Valentino Rossi has returned. His last visit was in 2009, the year of his ninth title. Now #46 is chasing title number ten, the fight about to get underway. First he will head to Jakarta though, where he'll unveil the M1 on 4 February.

“This year we'll present the Yamaha in Indonesia and there's great interest – comments the Italian – we'll unveil the new livery and I can't say too much, as it's a secret. The colours? Seeing as the brand is blue and the sponsor black, I'd say we'll have an Inter-inspired bike. Perhaps a little sienna on the mudguard. Ultramarine? We're getting close”.

Valentino Rossi takes the opportunity to look back and explain his initial passion for bikes.

“in 89 I started with mini bikes, then at 15 it was all about the Apecar, which I used to get to school, as it was too cold to use the scooter in winter. I was almost always late to school as I'd get up at the last minute”.

#46 didn't have the best relationship with his teachers.

“I once told my teacher that art history didn't interest me and she took it badly. She said: "You don't think you're going to get rich with those bikes do you?”

He was clearly found fortune in the world championship.

“I decided to race with #46 because that was my dad's number and it sounded good”.

Valentino's career has been all about his wins and unique celebrations.

“I'm pleased because many people have become bike fans thanks to my success. When I was young, me and the guys in my fan club didn't want to just have a simple podium celebration, so we decided to do something different, like the blow-up doll and other similarly silly things. Once I ran off to the bathroom”.

One win in particular stands out in his mind.

“The win at Welkom was the best, my first with the Yamaha. I have that bike in my bedroom actually. The South African GP was an historic moment in my career, as I had left Honda a few months before, having won so much, and I wanted to continue along that path”.

Rossi's performance on track has attracted the attention of various showbiz names, including Brad Pitt.

“He's a big bike fan, he often comes to the races. I told him that I'd like to be like him, for many reasons that I prefer not to list  (he jokes)”.

The Italian's mind is firmly on the present, Rossi also set to do battle with two Italians this season.

“This year we have Bagnaia and Morbidelli in MotoGP and if they finish ahead of me, I'll be annoyed (he smiles). I ride at the Ranch with them and all the other guys, we battle each other and share good times. Helping them and teaching them helps me to stay young, and we push each other to improve. I feel very close to them, as we share this passion for bikes”.

The bar is definitely raised once more, and Rossi does not deny this.

“In recent years, the way we ride has changed and that's down to the technology, particularly the electronics. You can lean more now and we see many riders riding as if they are hanging from the bike”.

Riding is in Valentino's DNA, the Yamaha he raced Rossi at Goodwood making an appearance in the TV studio.

“This bike has historic graphics that date back to the 70s. I keep all my title winning Yamahas at home. I use them to get from one room to another, like from my bedroom to the bathroom (he jokes). Before every race I spend about 40 minutes alongside the bike, talking to it, almost as if it were a date”

Then there is a sketch with Luciana Littizzetto, who pretends to be a grid girl and climbs on the bike.

“Dressed like that, you look the part Luciana – comments Valentino - will you come and be my grid girl in Qatar? We race at night under floodlights and it's amazing. How do you look on the bike? I think you'd make a good rider, you say you're not tall, but most riders are about your height".